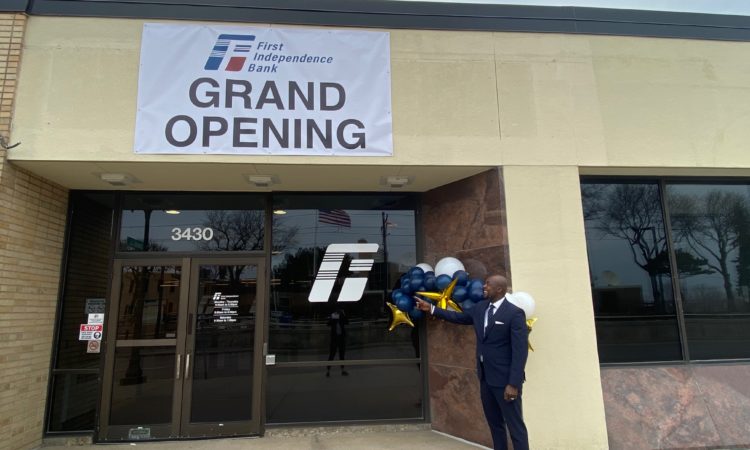 Minnesota’s first-ever Black-owned full-service bank opened its doors this week marking a major first in a state with some of the worst racial wealth inequality in the nation.

With a goal of reaching unbanked and underbanked communities, the newest branch of Detroit-based First Independence Bank opened in a former Wells Fargo building located at 3430 University Avenue on Tuesday, April 26.

It took a concerted effort by banking competitors to bring the new bank to the cities.

A conversation between banking leaders and First Independent Bank began after the killing of George Floyd, said Damon Jenkins, regional manager of the First Independence Bank locations. Leaders wanted to make a difference in their community, even if that meant helping a competitor enter the market.

Wells Fargo donated their former space to nonprofit Project for Pride in Living, which then leased it to First Independence Bank. Local economic development group Greater MSP, along with Bank of America, Bremer Bank, Huntington Bank, and U.S. Bank also provided research, capital, and marketing support to bring the new bank to the area.

First Independence customers will also have free access to 55,000 ATMs operated by Bank of America, Bremer Bank, Huntington Bank, U.S. Bank, JP Morgan Chase, and Wells Fargo as a result of those partnerships.

The new bank is looking internally and to community partners to find ways to help unbanked and underbanked populations.

A lack of access to banking and the tools that come with it drives inequities in homeownership that persist across the country but are particularly prevalent in Minnesota, Jenkins noted.

While nearly 77 percent of white households in Minnesota own their home, that number is 60 percent for Asian households and less than 50 percent for Native American and Latino households, according to the Federal Reserve Bank of Minneapolis. For Black Minnesotans, it’s even lower: 25 percent.

The Minneapolis bank plans to offer a program called Operation HOPE, a resource currently offered in its Detroit location that provides financial literacy and credit repair coaching with a goal to get people’s credit to a FICO score of 700. This will also help people work toward homeownership, Jenkins said.

Jenkins, a Minneapolis native and self-proclaimed “banker by accident” says watching people experience “firsts” drove his passion for banking. He said he is excited to share first-time banking experiences with the community in his new role.

While First Independent is Black-owned, leadership wants to make it clear it is not a Black-only bank. The business still needs support from the white community as well. This includes gaining clientele and continuing community partnerships.

When the bank started the process of launching this first branch in Minnesota, bank leaders engaged with community leaders including clergy and non-profits, establishing a group of ambassadors and stakeholders to hear from the community what their needs are. They plan to continue this work through partnerships like Project for Pride Living (PPL), along with urban leagues, the North Side YMCA, and Habitat for Humanity.

Kelly commends bank leaders in the Twin Cities for looking at themselves and the disparities that exist in their own industry. Helping bring more competition to an area is “unprecedented,” he said.

“In bringing us here it is a great way to demonstrate inclusion but inviting a competitor into the marketplace, helping elevate this topic along the lines of homeownership, credit restoration, and equality,” Kelly said. “It’s a model we should look at replicating or encouraging others to replicate around the country where we see these disparities.”