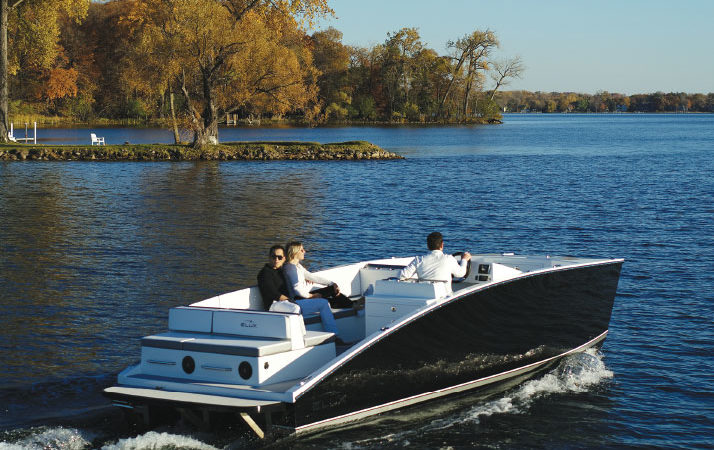 Elux Marine's electric pontoonâcoming soon to a lake near you. (Photo courtesy of Elux Marine)

To unplug from the stress of running Vascular Solutions, CEO Howard Root often spent weekends customizing boats in the workshop of his friend, craftsman Bart Jones. Jones and Root would talk about Jones’ idea for an electric luxury pontoon.

“That was 2017—right after I won my case and was still working at Vascular Solutions,” Root says. That year, following a multiyear legal battle with the federal government, he sold the Maple Grove medical device company for $1 billion.

Within months of those events, Root and Jones began work on their fiberglass pontoon prototype. The $85,000 boat debuted in January at the Minneapolis Boat Show under the company name Elux Marine. Only four of the 24-foot pontoons are being manufactured for sale this year, and all four have been purchased, including one for Root.

The Elux uses a 72-volt, 420-amp lithium battery-powered electric engine that can last more than 10 hours at cruising speed. The boat can reach speeds of up to 14 miles per hour, which is the low end of average for gas-powered pontoons.

The Elux looks more like a speedboat than a typical pontoon boat. The elongated cylinders, typical of the craft, are integrated into the hull rather than sitting under it.

“When I started my design work five years ago, I asked myself a simple question: What if a pontoon didn’t look like a pontoon?’” Jones says. “I sought to create a pontoon that was tailored for lake cruising but was also sleek and stylish.”

Minnesotans have long ranked among the nation’s top spenders on boating. Sales of boats have grown every year over the last eight years in Minnesota, according to the National Marine Manufacturers Association, totaling $807 million in 2017, a more than 12 percent increase over the prior year. Only four other states spend more on boats than Minnesotans do.

Root believes that passion, along with the innovation Elux offers, will drive sales over time. “I’m not saying we’re going to be the next Bennington boat company,” he says, “but we want to have a nice boat that people like that we do in small numbers and do very well.”