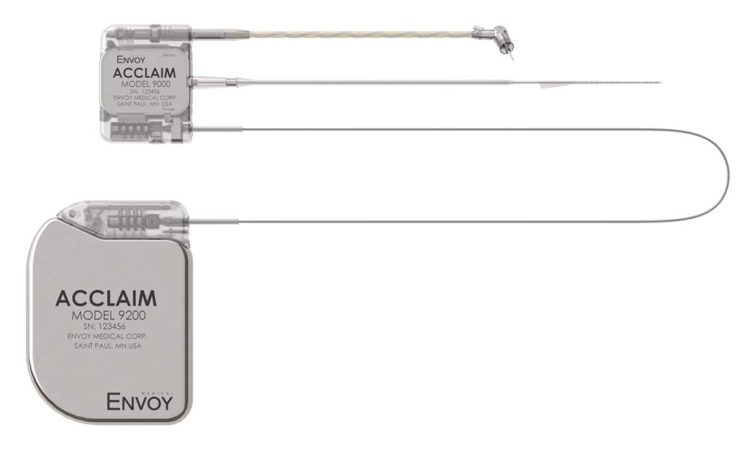 Envoy’s Acclaim cochlear implant is fully implanted in patients and has no external components. Courtesy of Envoy Medical

Known as Acclaim, the surgically implanted device is designed to restore hearing in those with severe hearing loss. Unlike similar products already on the market, Envoy’s device doesn’t have any external components, which means it is totally hidden from view. Brent Lucas, Envoy’s CEO, said that may help increase usage of the device.

According to data from trade group American Cochlear Implant Alliance, there are between 1.4 million and 4 million Americans with “significant hearing loss” who could benefit from cochlear implants. Of those, just 5 percent use the technology.

At Mayo, researchers will test the Acclaim on three patients as part of an “early feasibility study.” The patients have not been officially enrolled yet, but they will be as soon as Mayo’s institutional review board gives its blessing. Once the trial kicks off, Envoy will follow up with patients within 12 months.

In 2019, Acclaim earned the Food and Drug Administration’s “breakthrough device designation,” which essentially means federal regulators have pledged to help fast-track development of the product.

Envoy’s Acclaim device isn’t the first fully implanted cochlear implant on the market; in Europe, testing is underway on at least one other similar device. But Acclaim would be the first such device developed in the U.S., Lucas said.

These days, the main players in the cochlear implant market are primarily foreign companies, he said. Advanced Bionics Corp., previously headquartered in California, had developed its own line of cochlear implants, but the company was purchased by Swiss medical device company Sonova Holdings in 2010.

“A lot of our investors and employees are Minnesota based, so it’s great to keep the Minnesota connection going,” Lucas said.

Based in White Bear Lake, Envoy has a total staff of 25 employees.

Envoy has already received FDA approval for another similar implant known as the Esteem. That product is referred to as a middle ear implant, and it’s generally reserved for those with moderate to severe hearing loss. “The Acclaim is for more of a severe or profound hearing loss,” Lucas said.

Though Esteem has earned federal approval and has been on the market for years, the product “did have trouble gaining commercial traction,” Lucas said.

“The No. 1 reason for that is the lack of insurance reimbursement for middle ear implants,” he said. “It’s a big shame, and I think that’s something that the political leadership should always be looking at.”

Lucas doesn’t anticipate a similar struggle with Acclaim though, since cochlear implants are covered by insurance.

Should the Acclaim’s early study prove successful, the next step will be a “pivotal clinical trial,” which would involve multiple testing sites and more patients.