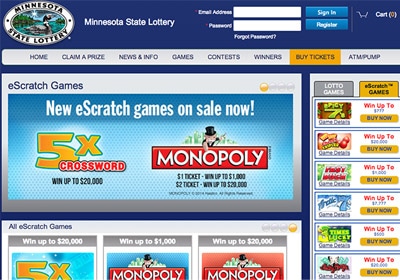 This February, the Lottery's online presence advanced to the point that players could purchase instant scratch-off tickets online.
April 18, 2014

It appears the odds are against  the Minnesota Lottery boosting declining sales with new Internet- and gas-pump-based games.

A bipartisan group of House and Senate heavyweights supports laws that would block online sales of scratch-off tickets. They also would stop the lottery from offering games at gasoline pumps and cash machines, among other places.

Gaming is one of those issues that unites the political right and left. It also brings the Minnesota Indian Gaming Association's political muscle into play. That’s a lot of clout lined up against the Lottery, which has introduced the new games because it has demographic problems.

“If something does not exist on the Internet, it doesn’t exist,’’ said Lottery director Ed Van Petten, explaining the need for the new games.

The Internet move started quietly enough. In November 2010, the Lottery started offering online sales of lotto-type tickets, meaning tickets for games that do not have instant payoffs.  Players had to subscribe to the service.

But this February, the online presence advanced to the point that players could purchase instant scratch-off tickets online.

Lottery officials have gone to considerable lengths to downplay these innovations. There is, for example, a $50 weekly limit on how much players can spend. The Lottery is not advertising the availability—at least not yet. In legislative testimony, Lottery officials say that there are studies showing that playing-at-home-games do not increase the possibility of gambling addiction.

“We just don’t think Minnesotans voted for this in 1989,’’ said Senator Rod Skoe, DFL-Clearbrook. “We all know people and families who have been hurt from problem gambling. How can any good come of this?’’

Recall: the legislature never did support the lottery. It came into play in 1988, when 57 per cent of Minnesotans passed a constitutional amendment making the lottery a part of the state’s culture.

The state has received 40 per cent of the haul since 1990. In 2012, that means various government agencies received $124 million from the lottery games Minnesotans play.

But Skoe—and others from both parties—believe Minnesotans intended that players would purchase tickets for various lottery games in “brick and mortar’’ establishments. Beyond that, many pols say lottery officials did not inform them of the “expansion’’ of games to the Internet and gasoline pumps.

Lottery officials argue two points. First, they did inform legislators of the Internet moves. Second, under the law, the Lottery is not required to receive legislative permission on how it sells chances.

To date, Lottery officials say that participation in online games is relatively small, in part because they are intentionally taking a go-slow approach. They say they don’t want to “compete” with the business owners which have been selling lottery chances, nor do they want to wade into new gambling technologies carelessly.

Skoe, who has the support of Senate Majority Leader Tom Bakk and Minority Leader David Hann, says that there is nothing preventing the legislature from blocking the new forms of gaming.

At a Senate Tax Committee hearing last week, senators did express some empathy for the Lottery’s difficult situation.