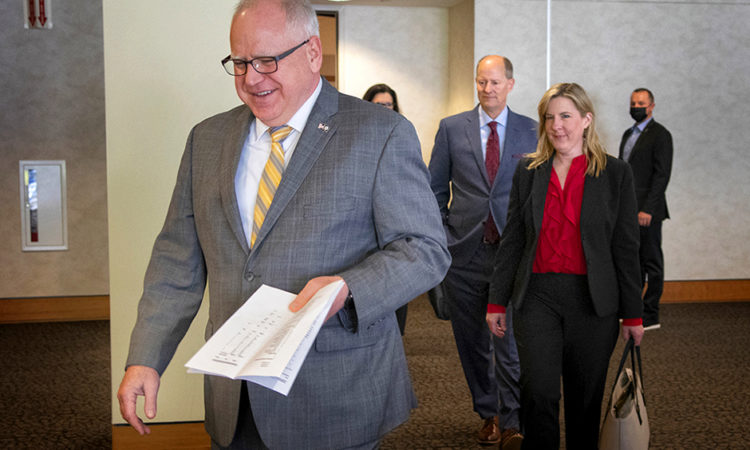 Under the state Constitution, the Legislature’s regular session had to end Monday at Midnight. With a broad spending deal now in place, lawmakers will spend the next several weeks working out the details to meet another constitutional requirement: actually passing a two-year balanced budget before July 1.
By Peter Callaghan & Walker Orenstein
May 18, 2021

Democrats in Minnesota state government thanked President Joe Biden and the Democratic Congress for sending them the money that made a $52 billion state budget deal come together Monday.

Republicans should have as well. Because without the $2.8 billion in direct cash to the state from the American Rescue Plan, reaching a deal would have been a lot harder otherwise.

Having a large cache of money tossed into negotiations at the end provided room for an agreement that satisfied the GOP’s no-new-taxes demand and the DFL’s insistence on boosting spending for schools and social programs.

Either/or became “Let’s do both.” And the deal was struck after a week or more of closed-door bargaining among Gov. Tim Walz, House Speaker Melissa Hortman and Senate Majority Leader Paul Gazelka. It was announced Monday before noon.

“We’re grateful for the stimulus act and the American Rescue Plan dollars that allowed us to work together on that,” Walz said. “We always push it to the wire a little bit, it’s kind of the nature of it.”

“We are required to send a big thank you to the federal government,” Hortman said. “President Joe Biden and the Democratic members of Congress who voted for the American Rescue Plan. It made this agreement possible today where we were able to do pretty much everything everybody wanted, with some compromises.”

Hortman cited tax cuts and what she termed historic funding in public schools as the DFL’s biggest wins. Not mentioned was a proposal for more than $1 billion in tax hikes on high earners that was dropped by the House DFL.

That too was a giveaway from Walz’s position that the state needed sustainable funding for those spending increases — that even if there was enough money from the federal government or the state’s own $1.6 billion projected surplus to pay for the spending in this budget, there might not be enough to keep paying for them in future budgets.

“The financial situation we’re in allowed us to make some of these now and then talk about what happens next,” Walz said.

Gazelka also acknowledged the role of the federal money in the compromise, as it allowed the GOP to keep their no-tax-hike pledge while including an agreement on how to spend ARP money that satisfies a concern of the GOP that goes back to last spring — that lawmakers have a role in spending the federal funds, not just Walz.

Setting the parameters for the budget

The regular 2021 session of the Legislature had to end at midnight Monday (though it ended up adjourning much earlier, around 4:30 p.m.). That’s what the Minnesota Constitution demands. Lawmakers will now spend the next several weeks working to meet another constitutional requirement: that they come up with a two-year balanced budget — and have it passed and signed — by midnight on June 30.

Monday’s deal set the parameters for that budget by deciding how much each of 12 omnibus spending bills can spend. It also decided how much would go to tax cuts, though without all of the details. At the very least, lawmakers agreed that the state won’t tax the extra jobless benefits provided by Congress last year or Paycheck Protection Plan loans that have been forgiven.

The Big Three — Walz, Gazelka and Hortman — also decided how to spend the cash coming to the state directly under the American Recovery Plan. Walz will keep $500 million to respond to pandemic-related costs, both in public health and in economic impact. Of that money, $75 million will be sent to school districts to pay for summer programs to boost student’s recovery from lost time due to the pandemic. Much of the rest will be used for general budget purposes after being used to make up for revenue lost during the recession, as measured by federal ARP guidance.

About $1.2 billion of the state’s ARP allocation is not appropriated yet, waiting for further action when the Legislature reconvenes in January of 2022.

What seemed like the deal to end the session was something less than that. “The work is not done, it just began,” Gazelka said.

That’s a reference to the fact that conference committees still have the task of agreeing on how the money is spent and what policy will be contained in the 12 omnibus bills. For example, the budget target for K-12 education provides enough to increase the state formula for school district funding by 2 percent each year of the two-year budget period. It also has enough money to accomplish many of the educational recovery and equity proposals in budget plans put forward by Walz and House DFLers.

(It also means that it is unlikely that any of the layoff notices sent by school districts this spring will lead to any actual reductions in staff. “With the funding we have provided, they should be able to start letting personnel know that they’ll be fully staffed up in the fall,” Hortman said.)

The calendar is now roughly set like this: the spreadsheets used to determine the spending in each of the bills are due from conference committees on May 28 and the policy decisions by June 4. A special session to pass them into law has to take place no later than June 14.

Hortman called the deal announced Monday a “numbers only agreement,” meaning lawmakers still have a range of significant policy disagreements to sort out.

That includes police accountability measures, which Democrats say are a top priority in the wake of the killing of Daunte Wright by a Brooklyn Center officer in April.

Hortman said there is “a lot of area for agreement” on policing measures that can pass a divided Legislature.

The policy disagreements also include “Clean Cars” regulations, which Walz plans to adopt and that would set tougher tailpipe emissions and require auto manufacturers to deliver more low and zero-emission cars for sale in Minnesota. Republicans oppose the vehicle emissions rules and some have pledged to hold up environmental spending unless lawmakers delay the regulations by two years.

Broadly, the top lawmakers said they’d let committee chairs negotiate on policy splits in the coming days. “There’s a number of issues that people are passionate about on both sides,” Gazelka said. “We think electric cars are coming and we have to figure out how we plan infrastructure for that. We just have a disagreement about the emission standards. We’re looking to see if there’s a solution there.”

Still, the budget deal struck by Walz, Hortman and Gazelka says that “any policy and finance provisions” included in final committee work “must be agreed upon by the governor, House speaker and Senate majority leader. That is similar to 2019, when the final call on controversial issues was made behind the scenes by the trio of top leaders.

The agreement also says that the budget targets do “not ensure approval of any omnibus bills,” meaning individual budget areas could still grind to a halt over impasses like the Clean Cars rule.

Lawmakers also agreed to spend $70 million on high-speed internet infrastructure in Minnesota. While a state task force says the Legislature needs to spend $120 million in this two-year budget to meet goals for broadband speed and coverage, the $70 million is still higher than the initial $50 million budget proposal made by Walz.

The budget targets also didn’t include whether there would be a publicly financed package of construction projects, known as a bonding bill. General obligation bonds require a three-fifths vote of the House and Senate, meaning the political minority in the two legislative chambers must be included in a final deal. The deal did, however, include $100 million in debt service for housing infrastructure bonds, which only need a majority vote to pass. If Congress passes an infrastructure bill in 2021 that includes similar housing money, the bonds won’t be sold under the agreement.

House Minority Leader Kurt Daudt, a Republican from Crown, said his colleagues hadn’t talked with House Democrats yet about a potential deal for a bonding bill. A DFL proposal made earlier in the year gained no traction with the GOP.

While the money from the federal government was the key to the budget deal, it also complicated negotiations. That’s because states were waiting for the rules as to how money was spent and what was off-limits. One example is the way states could calculate lost revenue. Minnesota budget officials were expecting that only $500 million of the $2.8 billion could be considered lost revenue replacement and be spent outside the constraints of the ARP law.

One week ago, the state learned that number was closer to $2 billion. That same day, the state also found out that it’s allocation was going to be $254 million more than it had been planning for.

“Part of the work and the challenge in putting together this budget was that the leaders were still getting new information from the federal government even as they were trying to reach an agreement,” said Minnesota Management and Budget Commissioner James Schowalter.

Not everyone was happy with the agreement Monday. Daudt, who was not part of the negotiations, said the GOP got little of what it wanted in the deal. He was especially upset that the PPP loan and jobless benefit tax forgiveness has still not been passed.

And he objected to the $500 million fund that Walz could spend with some oversight from a 10-member legislative committee. It is the same format used last spring for a $200 million state COVID response account. That account received bipartisan support in spring, including from Daudt.

“Who from the Legislative branch would ever agree to let the governor spend $500 million on whatever he wanted should turn in their election certificate and find a new job,” he said. “That is literally what the Legislature exists for.”

Any special session will look different in one significant way: an open Capitol Building. Closed to most of the public since the pandemic began in March of 2020, and later surrounded by chain link fencing after the civil unrest in May and June, the domed building has been the domain of lawmakers, staff and some reporters.

The state Department of Administration said it would begin removing the fence this week and Hortman said she will seek support from the Senate, the Supreme Court and Walz to lift pandemic capacity limits.

“We will be happy to invite the public back in this building,” Hortman said.