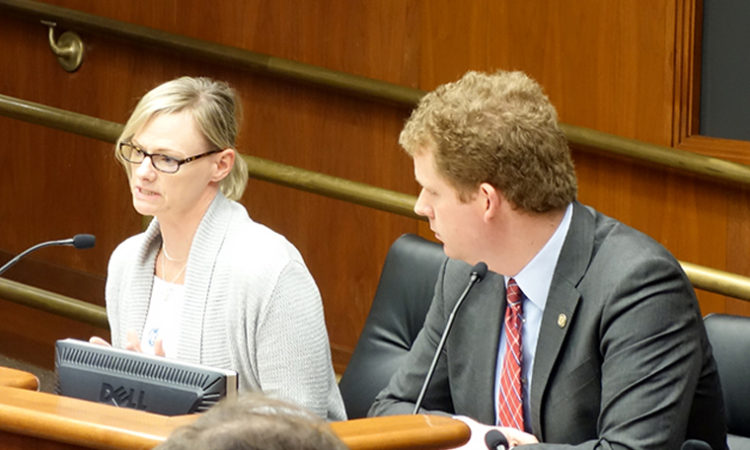 Rep. Zack Stephenson’s bill would appropriate $2.5 million to the Department of Employment and Economic Development to oversee the program and guarantee any defaults by workers. No interest could be charged during a shutdown or for 90 days after the end of a shutdown.
By Peter Callaghan
January 31, 2019

The practical problem for policymakers trying to do something to help federal employees during the government shutdown was timing.

State governments, including Minnesota’s, could use state reserve funds to pay upfront costs of some federally funded programs such as the Supplemental Nutrition Assistance Program (SNAP). And had the shutdown gone on beyond 35 days, the Legislature may have been asked to send more money. But even that would have come with the expectation of repayment once the feds got back to work.

Helping federal workers was trickier, though, because any bill that created a formal program would take time to consider and pass. A short-lived shutdown would have been history once any legislative response was in place, and it was only once the shutdown extended beyond a month did some DFL lawmakers decide to take action: proposing a measure to use state money to guarantee zero-interest loans that could be used to cover costs while waiting for paychecks to flow again. The program, which would have offered loans of $5,000 for every month of a shutdown, would be available through banks that choose to take part.

But sure enough, on the very day that Rep. Zack Stephenson and Sen. Matt Little unveiled the plan, the shutdown ended, at least temporarily. Since the initial plan would have terminated the day after a shutdown ends, the program became moot even before the legislative process began. So Stephenson, DFL-Coon Rapids, has decided on a different tack. Since shutdowns have become a regular tool in presidential/congressional gamesmanship — and since the reopening of government itself ends Feb. 15 without a longer-term deal — he wants to move ahead with the proposal, just in case.

Stephenson’s House File 319 would appropriate $2.5 million to the Department of Employment and Economic Development to oversee the program and guarantee any defaults by workers. No interest could be charged during a shutdown or for 90 days after the end of a shutdown. Banks could charge interest on unpaid balances after that and would have to go through regular processes to collect unpaid amounts. Only then could they request repayment out of the state fund.

Stephenson said he wants to do this for the short term and then consider if some sort of permanent program is needed. “You’d have to put some real thought into what would trigger it in the future and be really thoughtful about that and also think about the funding sources,” he said before a meeting of the House Commerce Committee Tuesday. “It’s one thing to do this as a one-off thing. It’s another to have it available year after year.”

“We’re going to press forward with making something available to government employees in the event the government shuts down immediately and then have another conversation about what to do in the long run,” he said.

Rick Beeson, the executive vice president of Sunrise Banks, supported the plan, saying it would be another tool available to help customers. But he said a state-sponsored program might ease a reluctance among some to ask for help during financial hardships. Jim Amondson, president of Independent Community Bankers of Minnesota, raised concerns over how the program would dovetail with existing banking regulations. Banks must provide truth in lending statements that give specifics about interest totals and when payments are due. Under the bill, loans would come due 90 days after the end of a shutdown, dates that wouldn’t be known by the lender.

Amondson said he also worries about non-discrimination laws that prohibit banks from favoring one group over another. He said he is checking with bank regulators for answers.

The bill passed out of the commerce committee on a voice vote that appeared divided by party. Rep. Pat Garofalo, R-Farmington, said he opposed the bill’s substance. The state agencies could get administrative fees but the banks wouldn’t, Garofalo said. And Rep. Chris Swedzinski, R-Ghent, said other state programs help workers through training and other assistance but they don’t guarantee personal loans that workers don’t repay.

Committee Chair Laurie Halverson, DFL-Eagan, said the shutdown length is unprecedented, and that the state is trying to work quickly in the event of another one. “Who do we know in our lives who can miss two paychecks?” she asked.

After the hearing, the prime sponsor of the bill in the GOP-controlled Senate, Matt Little, of Lakeville, said the program would be voluntary for banks. If a bank doesn’t like the concept or is concerned with the details it doesn’t have to participate. But no votes by Republicans on the House committee suggest a rough reception should the bill get to the Senate.