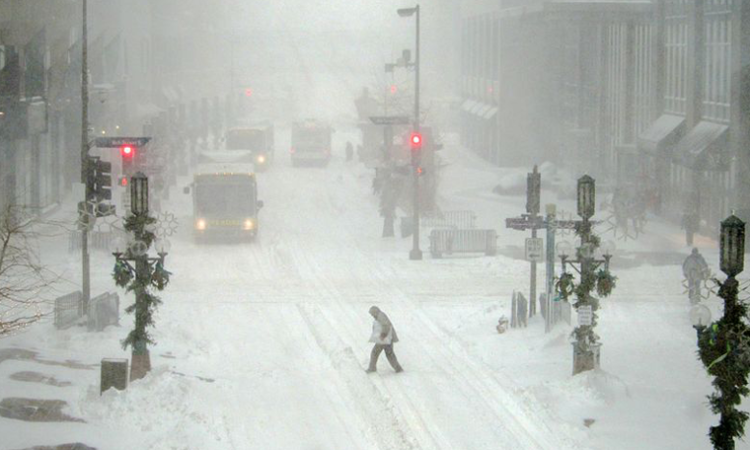 Downtown Minneapolis from one of the skyways during what is turning out to be one of the nastiest blizzards in over a decade. (2010) Photo by : Nic McPhee

Turnout was less than half of last year’s Saturday opening, although the next day was about par with last year’s Sunday, which was Easter.
By Amanda Ostuni
April 17, 2018

“Due to the storm, our Saturday numbers were less than half [of what they were] the prior year,” said Peter Schilling, the festival’s publicity and outreach manager, told TCB. He said the festival’s later films, scheduled in the 9 p.m. slot, as well as films shown at Metro State University, were all postponed.

Films in the prime 5 and 7 p.m. slots on Saturday and Sunday didn’t sell out as much as they usually do, Schilling added. Overall, Sunday’s attendance measured up to last year’s, which is to say slow, because the first Sunday of the 2017 festival fell on Easter. Saturday drew a slightly higher attendance amid the heaviest part of the blizzard.

Schilling explained that the rescheduled entries will be played during the Best of the Fest week that follows the official festival. Among the films impacted were Before We Vanish by prolific and renowned Japanese director Kiyoshi Kurosawa, and The Whiskey Bandit, an action-packed biopic by Hungarian director NimrÃ³d Antal (Predators – 2010). Exact times and dates for the make-up showings have not yet been announced.

“The Minneapolis St. Paul International Film Festival continued despite the storm,” said Schilling. “We still had over 2,000 enthusiastic audience members and stalwarts in attendance [on Saturday] alone.”

He also said that a few films did sell out, including Tully – a dramedy about motherhood and accepting help when you need it, from renowned director Jason Reitman (Juno) and local screenwriter Diablo Cody. The other was Won’t You Be My Neighbor? – a documentary by Morgan Neville about beloved television icon Mister Rogers.

The festival is set to run through April 28 with a closing party scheduled for 9 p.m. in the A-Mill club room. Events are being held at venues throughout the Twin Cities, including St. Anthony Main Theatre, Capri Theater, Riverplace and Uptown Theatre. More information on the festival and potential make-up times can be found here.