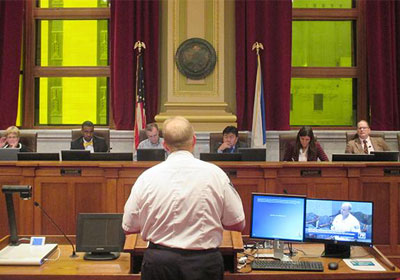 As part of a six-month test, 36 officers from three different police precincts will try out two kinds of body cameras and give feedback.
October 19, 2014

Body cameras will make their debut on Minneapolis Police Department officers the first week of November.

On Wednesday, Deputy Chief Travis Glampe said the four models of cameras have arrived and he hopes to have them in the field in a few weeks. As part of a six-month pilot project to test the models, 36 officers from three different police precincts will try them out and give feedback.

Glampe told the Minneapolis City Council’s Public Safety, Civil Rights and Emergency Management Committee that the field-testing will help the department pick winners among the two companies being considered. It will also help the department complete standard operating procedures for use of the cameras, which will be given to all officers in 2015.

But Glampe said the test period would not measure a few factors that some council members wanted, including how the cameras alter officer behavior and whether their existence increases public trust in the police.

“I think the general public needs to know if this is going to increase the effectiveness and the behavior all around,” said Council Member Linea Palmisano. “And I’m supportive of implementation in a way that will enhance trust, not make officers seem more robotic or less human.”

Glampe said the limited scale of the pilot will mean that such data might have to wait until cameras are placed on all of the nearly 800 sworn officers. He did say that police trade journals do support assertions that the cameras reduce use of force by officers and complaints by the public — and increase convictions. He also said officers might tend to be especially polite or friendly due to the presence of cameras, which he said was a good thing.

Palmisano said she worried that the cameras could reduce “authentic conversations” with victims and witnesses and potentially alter sensitive interviews with, say, someone reporting gang activity or in domestic violence situations.

Glampe noted that offiders would have discretion to stop cameras if they sense that a witness is intimidated or seems reluctant. But he said officers in the test would be told to keep cameras running whenever they anticipate what he termed “negative contacts,” when an arrest is possible. Domestic violence situations are such times.

The department has the authority to redact videos or obscure faces to protect crime victims or the identity of witnesses. Glampe said such editing occurs now with cameras in squad cars, and the department will follow the same procedures for body cams.

What the department wants to learn from the pilot study is how different makes and models work in cold weather, how easy they are to operate and whether body-mounted cameras would better than eyeglass-mounted cameras. The department also wants to know how many public records requests it receives for body cam video, how long it takes to process such requests and whether additional employees will be needed.

While the council did approve purchase of the test cameras, it has not yet acted on Mayor Betsy Hodges’ budget request of $1.14 million to place cameras on all officers.