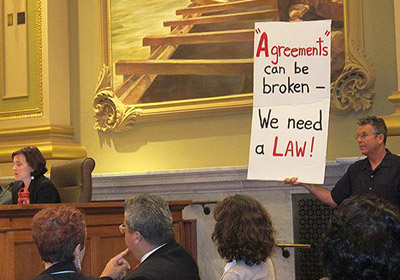 The council took its last steps toward a final vote Friday giving municipal consent for a route extending the Green Line from Target Field to Eden Prairie.
September 07, 2014

It was a textbook illustration of those times when politicians hold their noses. And still vote yes.

On Wednesday morning, first in a committee meeting and then during a special session, members of the Minneapolis City Council complained (a lot) about the circumstances surrounding the proposed Southwest Light Rail Transit route: how a plan to co-locate freight trains and light rail trains in a single corridor was a bad idea, and how pressure from powerful political interests were forcing their hand.

And then nearly all of them voted in favor of it.

By approving two memoranda of understanding with the Metropolitan Council and Hennepin County Regional Rail Authority, the council took its last steps toward a final vote Friday giving municipal consent for a route extending the Green Line from Target Field to Eden Prairie.

Muncipal consent is expected to pass, which will satisfy light rail proponents. Whether it will mollify route opponents remains to be seen.

“There is no victory to be claimed here,” said Mayor Betsy Hodges, who negotiated several side deals to gain city approval. “We came up with the most-responsible way forward.”

Council Member Cam Gordon said he might vote 'No' Friday if only to assure that the vote isn’t unanimous. That, he said, will send a message to the Metropolitan Council that the city’s support comes with great reservations. Gordon, however, said he supports the expansion and dubbed the route “a decent alignment.”

The biggest complaint from council members surrounds the reversal by regional officials of what Minneapolis thought was an earlier deal to relocate freight trains from the Kenilworth Corridor and reserve the narrow right-of-way for passenger trains. Now, in order to accommodate both — as well as a popular bike and pedestrian path — the light rail tracks will be placed in a shallow tunnel. That, in turn, has raised worries about accidents involving freight trains with potentially hazardous cargo as well as threats to the health of groundwater and nearby lakes.

A supplemental draft environmental impact statement looking into those threats has not been released, and won’t be ready in time for the council’s deadline for giving consent. Council Member Blong Yang asked for legal advice from City Attorney Susan Segal as to whether city consent can come before the EIS.

Segal wasn’t especially reassuring, telling council members they have a deadline for giving consent, and that the question of timing may well be decided after the fact by the courts.

To give route opponents — and themselves — some reassurance, the council adopted formal direction to staff to monitor the EIS process and report back if it unveils environmental threats.

Council Member Lisa Goodman, however, remained unhappy with the process and the result.

“Six of you sat up here and said we will not agree to co-location, not two years ago,” she said. “We said no way on co-location, we won’t do it. And now what we have in front of us is tremendous pressure by every outside government entity in the state of Minnesota, starting with the governors office, moving to the Met Council, unelected, moving to the Hennepin County — which screwed this up so bad and handed it to the Met Council to try to fix, the state Legislature … organized labor.”

Now she said she fears that if the EIS comes back raising problems, the same pressures will be brought to overlook those environmental threats and continue with the alignment without a tunnel leading to loss of trails or demolition of adjacent homes.

“Let that be a warning to you, when you vote for this you could be voting for something much worse down the line during your tenure here,” Goodman said. She did join a unanimous council in favor of two agreements that would keep the Kenilworth Corridor in public ownership which could lessen — but not eliminate — chances that freight use would increase or that more-hazardous cargo would pass through it in the future.

Council Member Lisa Bender then expressed what was a common sentiment for reluctant yes voters  — that the region needs to expand the system and although other routes might be preferable, she doesn’t think they are possible.

“If I thought voting today ‘No’ the train would come through Uptown in a reasonable timeframe in the future I would, but I don’t think that’s the case,” Bender said.