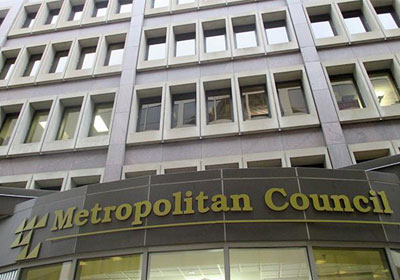 Met Council’s Next Chair Will Be Full-Time

Gov. Mark Dayton has said he would like the head of the seven-county regional agency to be full-time, much like the other members of his cabinet.
December 06, 2014

If you want to be the new chair of the Metropolitan Council — overseeing the agency charged with regional planning, transportation, housing and wastewater — you're going to have to quit your day job.

That’s because the current Met Council Chair Susan Haigh’s announcement last week that she will leave the job after nearly four years in the post created an opportunity to change the nature of the position, which has long been classified as a part-time office.

Gov. Mark Dayton has said he would like the appointed head of the seven-county regional agency to be full-time, much like the other members of his cabinet.
That would be a change. Since the agency legislation went through a major revision in 1994 with broader duties and responsibilities, the chair of the 17-member Met Council has been a part-time office.

Even though the job posting doesn’t note the change, those who meet the application deadline of December 1 should be prepared to make it their full-time job. “The governor has the legal authority to make it full-time and he intends to,” said Dayton spokesman Matt Swenson. “He feels it merits a full-time position based on the responsibilities.”

The council chair job is listed in the state law covering cabinet-level salaries as jobs that can be paid up to 120 percent of the governor’s pay of $120,000.

She said the responsibilities of the council have growth with the growth of the region and noted that it is currently in the midst of four major mass transit projects — expansions of both the Green Line and Blue Line light rail and the Gateway Corridor and Orange Line bus rapid transit routes.

“These projects require extensive engagement with the community, with business leaders and with elected officials,” Haigh said. “They require a lot of time and attention.”

That’s not to say that some who served didn’t devote more than part-time hours. But the compensation was almost half what the governor’s other cabinet members were paid, and came without benefits.

“It’s not full-time. It’s not even a job,” said Curtis Johnson who was the first chair of the council after it was reconstituted in 1994. The pay, about $61,000 now, was a stipend rather than a salary. Johnson, appointed by former Gov. Arne Carlson to be the council chair in 1995, said different chairs have been able to devote differing amounts of hours to the position. He estimates that he devoted 80 percent of his time, that Ted Mondale was able to give between 50 and 60 percent and that the longest-serving chair, Peter Bell, devoted “110 percent.”

“Without anyone formally declaring it so, it has become a full time position,” Johnson said. “The scope of the council's work, the political tension that constantly swirls around it, and the competitive stakes for how the region's underlying assets get managed — all come together to make this responsibility something you cannot do well part time. Times change. Assumptions have to as well.”

When he left the position in 2010 after eight years, Peter Bell said he believed the chair should be full-time. He hasn’t changed his mind, and thinks the move isn’t the only change needed, that some change to how the rest of the council is selected should also be considered. “I also think the policy questions surrounding the Council go far beyond the full- or part-time status of the chair.”

Myron Orfield, a University of Minnesota law professor who sponsored the bill that modernized the Met Council in 1994, said he thinks the chair should be a full-time part of the governor’s cabinet. “I think that would make a big difference. I think it is an inherently interesting job, but its time demands are really full time and require a pretty seasoned person.”

But she said she doesn’t think she would have accepted the appointment in 2011 had it required her leaving her job with Habitat. She balanced her dual duties by scheduling daytime Met Council meetings for Monday mornings and all-day Wednesday.

“I’m not sure I would have taken (a full-time position) because I am committed to my work at Habitat,” she said. “I’m very excited about my work there.”