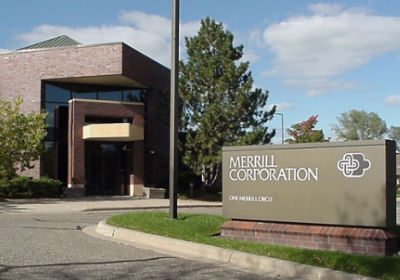 Credit rating agency Moody’s predicted that Merrill Corporation, if it defaulted on its debt agreements, could take one of three paths: a full refinancing with existing and/or new lenders, an out-of-court debt restructuring, or bankruptcy.
August 05, 2012

One of Minnesota’s larger private companies faces imminent debt maturities—and while it appears that lenders are interested in working with the company toward a long-term solution, a default on its outstanding loans could lead to substantial debt restructuring or even bankruptcy, according to credit rating agency Moody’s.

St. Paul-based Merrill Corporation faced a mid-June deadline for paying back cash advances under a $40 million revolving credit facility, but it struck a deal with lenders to extend the due date to July 20. In exchange, lenders reduced the amount of revolving credit offered to Merrill to $34 million and boosted the interest rate, Moody’s said in a July 9 report.

The credit agency predicted at the time that Merrill did not have sufficient liquidity to meet the extended deadline—and it appears that prediction was accurate.

In a prepared statement e-mailed to Twin Cities Business on Tuesday, Merrill said that it has been granted another extension, which pushes back the due date to December 22.

“We are pleased with this agreement as our company continues to perform well,” Merrill said. “We remain in negotiations with all of our lenders and possible new investors to refinance or restructure our outstanding debt.”

In addition to the December due date for its revolving credit facility, Merrill faces other looming deadlines: a $374 million loan, which is also due in December, and a roughly $215 million loan, including accrued interest, which matures in November 2013, according to Moody’s.

In the event of default, Moody’s predicted three possible paths that Merrill might take: a full refinancing with existing and/or new lenders, an out-of-court debt restructuring that would result in some losses to lenders, or bankruptcy protection, which would likely result in greater losses to lenders.

“While we view one of the out-of-court solutions as most likely, a bankruptcy filing cannot be ruled out if bank lenders do not agree upon a common solution,” Moody’s said in its July 9 report.

The agency said, however, that lenders have “evidenced a willingness to work with the company towards a longer-term solution” by granting deadline extensions. In addition, Merrill’s credit deal includes a “standstill provision” for one group of lenders, which requires them to wait 180 days after the November 2013 maturity date before exercising their rights—a provision that grants Merrill some extra time, if needed, to come to a solution.

“If lenders thought there was no way to salvage this,” they could have already attempted to force Merrill into bankruptcy, Benjamin Nelson, a corporate finance analyst at Moody’s, told Twin Cities Business on Wednesday.

Standard & Poor’s has also called attention to Merrill’s imminent debt maturities: In May, it lowered its corporate credit rating on the company, citing “risk of a breach of covenants and near-term refinancing risk.”

Merrill provides financial printing and publishing services and outsourced solutions for business communication and information management. It employs more than 5,000 workers and operates roughly 40 domestic and 22 international locations, according to its website.

As a private company, Merrill isn’t held to the same financial disclosure requirements as public companies, but the Moody’s report indicates that Merrill has improved its financial performance since the recession. The company’s revenue totaled $783 million for the fiscal year that ended in January, up from $759 million for the previous year.

The company has successfully improved operating performance from recessionary lows, and cost structure adjustments have led to higher operating margins and a restoration of about half of the earnings decline experienced during the recession, Moody’s said. But modest economic growth in the near term will likely limit Merrill’s ability to significantly boost revenue or improve cash flow, according to the credit rating agency.