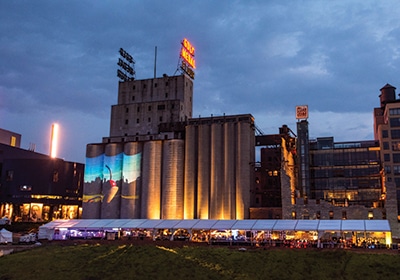 Don’t turn your smartphone on silent for your next off-site company meeting. 2014 gave birth to new trends that can engage people who often dislike meetings and conferences. Off-site meetings can bring back memories of stuffy hotel rooms, awkward encounters with peculiar people and dull event speakers. Not anymore. Meeting planners are finding ways to make sessions more dynamic, so people will recognize it is worth their time to attend conventions and meetings.

“It’s all about creating a memorable experience. I think that having great content is an expectation. What are you going to do to make the meeting memorable?” asks Jenny Prosser, vice president of conferences and sales for LeadingAge Minnesota. The answer, she says: Stellar content and engagement.

So what is a good way to deliver or connect people to stellar content? Social media.

Attendees can be found with their eyes glued to their smart devices instead of giving the speaker their full attention, so it makes sense to take advantage of those devices. “We always have a Twitter feed going. It’s key to getting more interaction,” says Madonna Carr, vice president of destination services at Meet Minneapolis.

A convention and visitors association that promotes the Minneapolis community, Meet Minneapolis recently played a key role helping host Major League Baseball’s 2014 All-Star Game at Target Field. It deployed social media as an engagement tool. “We just used a Twitter feed as an online concierge,” says Carr. “Do this. Eat here. That type of thing.”

“People are engaging more because they have the opportunity to win prizes,” adds Tamara Spude, director of destination services at Meet Minneapolis. “I even have an event coming up where they are doing a Twitter contest every day, where they look for the best tweet.” Social media offers business leaders and conference planners feedback as events are unfolding. “It really helps get the younger workforce generations involved and engaged in these meetings,” says Becky Harris, director of sales at Event Lab, an event services and planning company based in Eden Prairie.

“We want to know what they think is lacking or if we did something good, because the younger generation will be the really engaged participants on Twitter,” she adds. 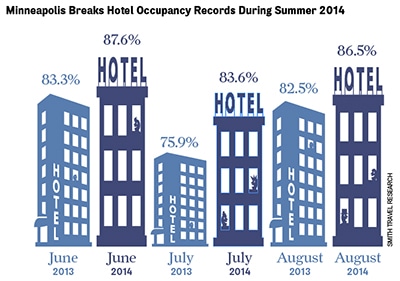 Fun outside the conference

Not all of the interaction and engagement takes place during the meeting or event. “We need to get them out of the meeting room,” Harris says. Location plays a critical role in off-site meetings and conferences. Event planners are taking the conference out to the community to give attendees a taste of local culture and experiences that highlight the convention locale.

The Twin Cities hosts several national conferences each year. “We promote our skyways for the winter months,” says Carr. “In the summer, it’s our bike trails and outdoor festivals.”

Harris is also seeing many businesses that want to include a corporate social responsibility event on their conference agenda. Many event planners seek to take meeting attendees to community settings. “It gets them up and out of their seats, maybe building bikes or backpacks or helping out at a food shelf,” Harris says. “It’s just a great way to engage everybody and have a good time.”

St. Paul-based LeadingAge Minnesota, an association of organizations that serve senior citizens, recently hosted its annual meeting and incorporated good deeds into the conference agenda. “We did a program where we actually built bikes. We ended up donating all the bikes to a local kids’ group,” Prosser says. LeadingAge Minnesota also has created donation campaigns. “The money we raised recently went to delivering gifts to isolated seniors who might not have family or friends visiting.”

Of course, off-site meetings and conferences include more than doing good and tweeting. People of all ages are looking for some entertainment. But “just because I like to do something doesn’t mean everyone else will like to do it,” says Prosser. “Would a person at 20 and 50 think [the same thing] is fun? That’s the blend that needs to work” at events. LeadingAge Minnesota hosted 350 top leaders, which included CEOs, administration staff, and corporate office staff, in September at Maddens on Gull Lake resort in Brainerd. “It was a little difficult to plan because we are in this [organizational] transition mode. We have the new-generation leaders attending these meetings and there is a huge age gap. We needed to be creative in our planning,” says Prosser.

The first day, LeadingAge Minnesota took attendees to the golf course. “We like to call this our relaxed fun day. It’s a great way to get everyone connected,” Prosser says. By the end of the four-day conference, attendees were making salsa. “We did a secret salsa activity. We brought it back from nine years ago because people were still talking about it,” Prosser says.

The activity starts out with attendees taking a bandana as they enter. Offered in an assortment of colors, each color signifies a team. “If I were to, say, walk in with my friends, we would all get a different-color bandana and be on different teams,” says Prosser. “It’s a great way to get people to engage with other people besides their friends.”

Throughout the activity, attendees earn money by playing a variety of games. With the money they earn, they can buy ingredients and supplies to make the salsa. “They are literally buying knives and cutting boards, along with tomatoes and onions,” says Prosser. “Event Lab set up the room like a store. There were cans of pineapple, and if you didn’t buy right away you might not get [the ingredient you want] because there is only a limited supply of everything.” Once everyone was finished making their salsa, they were judged on taste and presentation. The winners got a “secret salsa champion” apron. 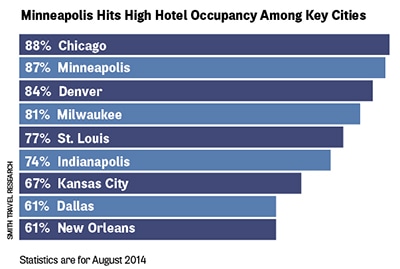 Just as technology has transformed people’s lives at home and at work, it also has altered what people expect to experience at a conference or off-site company meeting.

Hassle-free check-ins are possible because of smartphones—Excel spreadsheets and highlighters to update conference lists is a practice of the past. Today, event planners have apps such as Event Check-in and Check In Easy, with boarding-pass technology, to avoid long lines.

Random seat assignments also are fading away. Attendees now can receive a seating assignment based on their social connections, with apps such as Social Tables. “We haven’t used it yet, but it might be in our foreseeable future,” says Prosser. Social Table allows meeting and event planners to seat attendees to provide optimal guest experiences. Attendees can be seated based on job positions, workplace locations or other factors.

Slide-sharing is another recent, and popular, tool. It has been around for a few years, but meetings and conferences are just beginning to use it. SlideShare allows attendees to leave the conference note- and paper-free, yet with all the information they need. Most slideshows can be accessed on company or event websites, and LinkedIn, Twitter and Facebook allow attendees to be a click away from any information they may have missed.

“Overall, it’s all about what someone takes away from the off-site,” says Prosser. “Newer generations are coming into the workforce, and we need to start acknowledging that and all the technology and fun they bring with them.”

Hotels hit the highest occupancy rate in Minneapolis history during the summer of 2014, according to Meet Minneapolis President and CEO Melvin Tennant.

Minneapolis hit all-time occupancy records in June and August, when the rates were 87.6 percent and 86.5 percent. In July, the occupancy rate was 83.6 percent, which was 7.7 points higher than a year earlier. Those figures were reported by Smith Travel Research.

Hotel revenue increased 59 percent during All-Star Week compared to one year ago, according to a Smith Travel Research report. For the full month of July, the average daily rate paid by hotel guests jumped from $149.49 in 2013 to $169.40 this year.

The All-Star Game wasn’t the only reason hotels reached the highest occupancy rate. Minneapolis also hosted the Shriners International Imperial Session in July and the USA Volleyball Girls Junior National Championships at the end of June and early July.

In August, the Meeting Professionals International 2014 World Education Congress and the National Conference of State Legislatures summit were both held in Minneapolis.

Next year, Minneapolis and St. Paul will host the National Senior Games, which will bring in close to 35,000 attendees during the 16-day tournament. “It’s a premier event for the Twin Cities,” says Kristen Montag, communications manager at Meet Minneapolis.

The Railway Interchange, an event hosted by multiple railroad industry organizations, also will come to Minneapolis in the fall of 2015, bringing in an estimated 9,000 attendees.

The new Minnesota Vikings stadium is scheduled to open for the 2016 football season. Already, event coordinators are making plans for the Super Bowl that will be played in Minneapolis on Feb. 4, 2018.

Before corporate sponsors and football fans converge on the Twin Cities, several major building projects are expected to be completed. Those include renovations of Nicollet Mall, further work on the transit system and expansion of hotels and the Mall of America.

2015 National Conferences in the Twin Cities

Minneapolis, St. Paul and surrounding suburbs will play host to several national conferences and events in 2015. Here is a sampling of key national events.

Church of God in Christ Inc.
May 20-June 2
Convention
Minneapolis