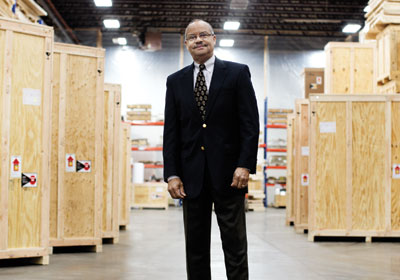 What ties them together? An intense focus on solving clients’ problems.

“The companies aren’t different,” says Wallace. “They’re built on the same model, just delivering different services. They have the same philosophy: We can win together. And it’s the same story in how you take care of your clients.”

Though always a “people person,” it took a couple of decades in business for Wallace, now 67, to figure out how to turn that into a business philosophy.

Born in the Bahamas, the son of a butler and a maid, Wallace came to Minnesota almost 50 years ago after Benedictine monks offered him a scholarship to St. John’s University in Collegeville. At a beer joint near campus he met a girl named Sandra Hiemenz—who became his wife of 47 years, mother of his children, and business partner.

Wallace started out in public accounting and management services with the Chicago-based firm Lester Witte, and through a client there became an owner in a Minneapolis collections business, Metro Services. The business appealed to him because it was recession-proof, but over time the industry changed. “It turned into a commodity-type business,” focused on controlling costs, Wallace says, and eventually, he and his partners sold it.

In 1987 he and Sandra bought Independent Packing Services Inc. (IPSI), which specializes in solving complicated packing and crating problems, with the idea that she would run it. They first encountered IPSI as customers, when they needed to transport heavy furniture to relatives in the Bahamas, and were impressed by the business’ founder, Gil Roemer, and the company’s customer service. At the time, IPSI had just two employees and revenue of $400,000 a year.

Now the Wallaces’ son Joe is president, and IPSI employs 49 people. The company has been able to expand while others were retrenching, moving into its new building in Crystal in 2010 that is almost twice as big as its old one.

Wallace credits a couple of mentors with helping him discover his approach to acquiring and operating companies. One was former Northwest Airlines CEO Steve Rothmeier, who pointed out that while Northwest and Republic, the carrier he acquired, were in the same industry, their business models were as different as night and day.

Then Warren McLean, former president of the Metropolitan Economic Development Association (MEDA), put Wallace onto the book The Discipline of Market Leaders by Michael Treacy and Fred Wiersema, which lays out three paths to business success: product leadership, operational excellence, and customer intimacy. His choice was clear.

The book became a bible, Wallace says. “We study it. I’ve probably read it 40 times.”

“Then a light bulb went on,” Wallace recalls. His job was to give his customers peace of mind. Even if a client makes a mistake, “we’re not going to make you look bad,” Wallace says. The reward: loyal customers.

Once you adopt a customer-intimate focus, Wallace says, “it forces you to choose different types of assets,” and hire people who share the same orientation.

In 1998 the Wallaces bought Morris-based West Central Environmental Consultants, which provides environmental remediation services, and in 2008 followed with Matrix Environmental, which offers field sampling services, moving it into IPSI’s old space in Maple Grove. Then in May they acquired a wastewater treatment company, Minneapolis-based WCC Industrial Services.

Wallace extends the same approach he uses with his customers to other relationships. “He has tried to structure transactions so that they are not only beneficial to him, but also to the other party,” says Paul Dove, an attorney for Wallace and a partner in the Minneapolis firm Dove Fretland and Van Valkenburg.

Wallace says that when he acquires a company, he sits down with each employee, asking them, “What are your wishes, your goals?” He anticipates their needs in ways other employers might not think of, like helping someone find a home in a better school district. “Family is important,” Wallace says. “How do we help families climb the financial ladder?”

One way: Helping them get an education. Every year for the past decade, he has provided up to 10 scholarships of at least $1,000 each for employees or their children. The only requirement for scholarship recipients is to write him a letter detailing how they plan to give back when they graduate.

Pilar Alvarado has worked for IPSI for 12 years, since immigrating to Minnesota from Peru. Her daughter, Nancy, received a $4,000 scholarship from Wallace to start at the University of Minnesota. She graduated in 2008 and is now a universal banker with U.S. Bank, and has volunteered with a number of organizations that help at-risk youth. Wallace’s four businesses now employ 120 people, many of whom have worked with him for a decade or more. His commitment to his employees inspires a deep sense of loyalty, he says—“so deep they won’t let you fail.”