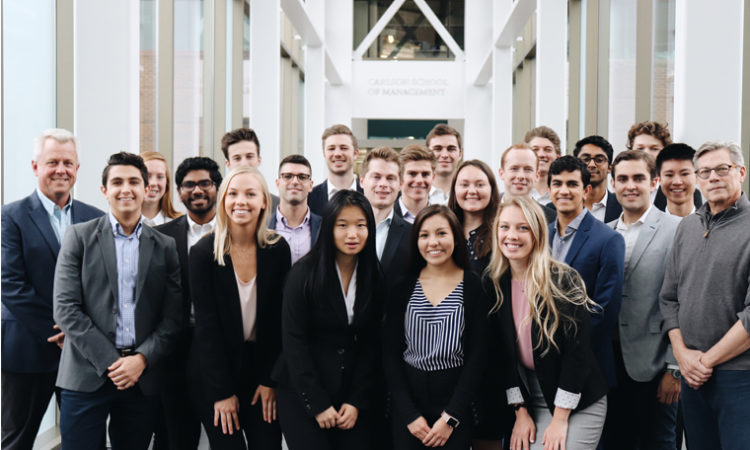 Meet Atland Ventures: The First-of-Its-Kind, Student-Run VC Firm at the U of M

The story of the founding, structure, early accomplishments and direction of a venture capital startup company comprised of University of Minnesota students.
By Amanda Ostuni
October 16, 2018

The University of Minnesota has long been a hotbed of innovation, launching hundreds of startups and entrepreneurial ideas over its more than 150-year history. One of the newest, though, is unlike anything the school’s ever seen: an independent, student-run venture capital firm called Atland Ventures.

Targeting seed and series A-level companies (not exclusively from Minnesota), Atland’s leadership team believes its firm is the first of its kind in the country that was founded by students under a for-profit structure. The fund intends to make investments around $30,000 into five companies every year over the next seven years. With that target in mind, they hope to raise $1.3 million, and expect that to keep the company going for a decade.

“This is not just a student organization. Legally and from a structure standpoint… we’re our own independent company,” says Matt Jessen-Howard, director of Atland Ventures and currently a senior studying entrepreneurial management. “Students can actually see money from investments.”

Atland Ventures was founded in 2016 by four U of M students (who have since graduated) — Sourish Ghosh, Harshil Chahal, David Brown and Samuel Bagley. Glaring curriculum gaps were the impetus behind Atland’s start, explains the firm’s current managing partner Lucas Vaz. Students interested in how startups raised capital and decided where to invest — in truth, the VC process at large — were not being addressed in the classroom.

In turn, the students were eager to find a solution and satisfy that curiosity. Now, at Atland Ventures, the organization of students take the VC process into their own hands, from identifying potential investments to conducting in-depth research and analysis, all the way down to the point of making an investment.

The stakes are real, too, with investors money on the line — meaning returns must be delivered to keep Atland afloat. Likewise, students in the firm saddle plenty of stake, as after the investor gets their due, positive returns will be carried over to the students.

The company launched with the financial support of one investor — an undisclosed University of Minnesota alumni. Atland plans to attract more backers, as well as have Atland/University alumni become investors themselves. (The original investor also inspired Atland’s name, which was borrowed from Atlas Shrugged, a book by the investor’s favorite author.)

Beyond money, Atland Ventures also taps into its network of alumni advisors to gather feedback during the due diligence, or research, process involved in assessing the merit of an investment. Moreover, advisors have been known to review the final presentations before the student team jumps into a deal.

Enthusiasm from advisors has been significant, says Lydia Hanna, another Atland director.

“Some of them even changed their LinkedIn profiles to be our advisors because they see the potential for how amazing this organization can be,” says Hanna, a senior studying entrepreneurial management and computer science.

Like all venture capital firms, Atland Ventures has certain guidelines for what startups they’ll consider. For one, in targeting Seed and Series A startups, they’re looking for companies already generating revenue, Hanna explains.

Regarding industries, Hanna says they’re agnostic, but they are looking at companies working in a field that’s light in production capital and not heavily regulated. Additionally, they’re in search of concepts that can be scaled quickly and, from a research standpoint, proof that there’s a market for the product.

“The general profile of a company we’d be looking at is one that has under $200,000 in monthly revenue, probably a team of under 10, and they’re looking for capital to scale quickly to get into key markets and grow fast,” Jessen-Howard summarizes.

Hanna adds that Atland Ventures will likely keep the geographic scope within the Midwest, primarily because it allows the company to leverage the connections with the university, and limits overhead costs, since having investors on the coast can be expensive.

Internally, the company just finalized its legal and organizational structure this spring.

The current team is comprised of 23 people. The entry role is analyst, and there are three directors, a treasurer and three vice presidents, each handling a different company aspect. Directors oversee the research process and report to the Chief Investment Officer. Meanwhile, as managing partner, Vaz oversees the vice president and leads the investment and strategic sides of Atland.

“It truly feels like managing and building an independent company — which we are — and it’s by far the most exciting thing we’ve done in college,” says Vaz.

But since the point of Atland Ventures is to be student-run, turnover is high, as members continuously graduate.

Hanna explains they have a clear system to deal with leadership changes, with departing managing partners and advisors collectively choosing the newest managing partner and the whole organization voting on VPs. Jessen-Howard notes they are working to figure out the best ways to transfer knowledge and maintain consistency and stability amid the turnovers.

When it comes to recruiting new students to the company, the process isn’t unlike any other job. The team does a resume screening, looking for exceptional students. During the in-person interview, they try to assess how the candidate will fit into venture capitalism and entrepreneurship, their level of interest, and their work ethic. They’ll also present a case question to see how the candidate handles the hard-numbers aspect.

“What we’re looking for is a passion for entrepreneurship and a level of intellectual curiosity in which students will be able to learn more about a topic that will not be taught in a regular classroom setting, on their own time,” says Vaz.

Applications are open to students of any majors. The only limitation established in the recent recruiting round was that students could not be seniors.

Recruitment is done early each semester. Eight students were selected for the Fall semester out of more than 120 applicants, amounting to a 7 percent selection rate. Chosen students included one freshman, four sophomores and three juniors, and their areas of studies were varied, including philosophy, bio medical engineering, and political science.

“One of the things that we see as a big asset to us right now is [that we have] a lot of cognitive diversity among our students. They come from a variety of backgrounds,” says Vaz. “It’s not just finance as some people might initially think.”

The where to now

Big picture, Vaz hopes Atland Ventures will be seen as the gold standard for entrepreneurial experience in college.

“We see this as not only an extremely valuable opportunity,” says Vaz, “but also as leading the way for what might become in the future a very fantastic opportunity for people throughout the country.”

Yet, students running venture capital firms isn’t an entirely new concept. One of the earliest examples originated from the University of Utah in 2001. The firm, University Venture Fund, still exists today but operates under a different model than Atland.

The University Venture Fund was founded and is overseen by experienced professionals who are cited as managers of the fund (a role which includes sourcing deals), whereas Atland Ventures was founded and is purely overseen by students, with experienced professionals serving only as advisors. University Venture Fund also incorporates students of various colleges in the area, while Atland Ventures is comprised only of University of Minnesota students.

Other student venture capital firms have popped up since 2001, as well, all with varying leadership structures and characteristics. And while Atland's model may not be entirely different from some of them, it's the first of its kind in Minnesota, and all of the firms throughout the country share a similar goal with Atland.

“Our goal here is for the students to have a great learning opportunity that’s rare,” says Hanna. “But it’s also a goal of ours to have returns on our investors because we’re a company and that’s what we’re here to do.”