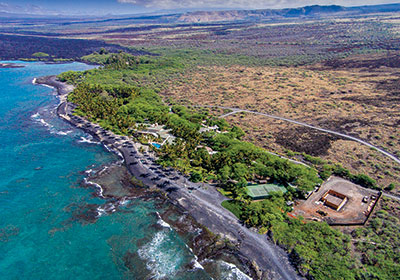 Medtronic Founder Goes Off The Grid

Native Minnesotan Earl Bakken is known for inventing the pacemaker and founding med-tech giant Medtronic Inc. But at age 91, Bakken is still chasing new ideas. At his estate on the Big Island of Hawaii, Bakken is literally going “off the grid” to power his large residence, Bakken Hale at Kiholo Bay, entirely on solar power. (Biodiesel backup generators kick in after four consecutive cloudy days.)

The project calls for 512 solar panels to power the estate, which is anchored by a 17,000-square-foot house on a 9-acre site. The timeline calls for completing the work by the end of June, after which the property will use no fossil fuels. Bakken has previously used three propane-powered generators for Bakken Hale.

“Earl typically thinks outside of the box, that’s for sure, and this is a great example of that,” says Adam Atwood, general manager for Bakken Hale. He says that Bakken wanted to make the site as “green as possible.”

Atwood notes that Bakken’s property, which sits on the island’s sunny west coast, is an “environmentally sensitive site,” another reason the project is important to Bakken. “We think it’s the largest solar residential project in the country, if not the world,” says Atwood. He declines to disclose overall expense.

Energy will be stored by a battery made by Pittsburgh-based Aquion Energy, which specializes in off-grid systems. The battery contains no lead acid, as standard batteries do. “This is a totally new kind of rechargeable battery,” says Ted Wiley, co-founder and vice president of product and corporate strategy for Aquion.

Bakken tells Twin Cities Business that he had wanted to install solar when he began building his house in the early 1990s, but that the county would not allow the project. He notes that the current plan still required five different permits and that the solar panels must be shielded from view.

“We’re way off the grid now. We’re too far from power,” says Bakken. “I’m just happy that we’re doing this, because the generators were noisy and they produce so much CO2 into the air from burning propane. It’s so nice to get something that’s quiet and clean for the environment. It’ll pay for itself in six years.