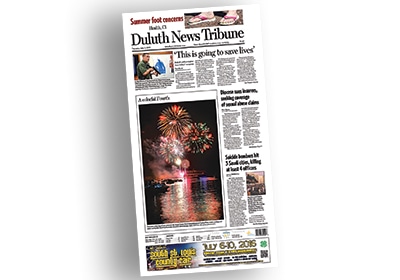 Media Powerhouse On The Prairie

Local business mogul Glen Taylor owns the Star Tribune. Denver-based Digital First Media owns the St. Paul Pioneer Press, the company’s sole property in the Upper Midwest. But the newspaper holdings of both pale in comparison to Fargo-based Forum Communications Co., a fifth-generation family-owned operation tracing its history to 1917, which owns more than 60 print publications. That includes 36 newspapers, 10 of which are dailies.

The privately held media company, which does not disclose revenue, has been on an expansion tear of late. Since late last year, it has closed on three acquisitions. In December, Forum acquired three Duluth magazines, including Duluth-Superior Living.

Everything the company owns is within 300 miles of Fargo, with titles in North Dakota, South Dakota, Minnesota and Wisconsin. As many businesses go global, Forum sees advantages in its regional focus. The company owns 25 newspapers in Minnesota, including dailies such as the Brainerd Dispatch and Worthington-based Daily Globe, and other titles including the Park Rapids Enterprise and the Hancock Record.

“Three hundred isn’t a magic number, but the territory is a strategic decision,” says Matt McMillan, vice president of newspapers for Forum Communications. “The proximity of our company allows us to manage the business effectively.”

Community newspapers are still anchors in many smaller cities.

“A really good local newspaper fills an enormous role in the community in which it’s located,” says Tom Slaughter, executive director of the Des Plaines, Ill.-based Inland Press Association, a nonprofit group largely composed of smaller market newspapers. “That is felt much more strongly in smaller communities than it is in big metros.”

Slaughter says that newspapers everywhere are dealing with “massive changes,” but that papers in smaller communities have more time to adapt. “If you’re a major metropolitan newspaper, your competition is Google and Facebook,” notes Slaughter. “If you’re in a smaller market, you’re less challenged by those forces.” And as McMillan notes, “There’s less competition for readers in the smaller markets.”

Says McMillan: “Having this clustered media company allows us opportunities like sharing stories [and] providing a regional audience to regional advertisers.”