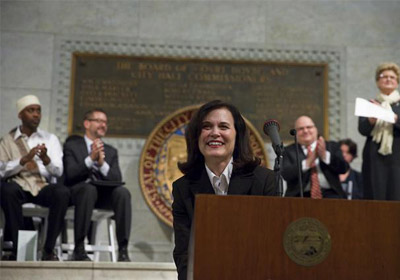 Mayor Betsy Hodges: "In every part of Minneapolis, we must maintain and grow the middle-class backbone of our city."
January 17, 2014

Mayor Betsy Hodges, in her inaugural address Monday, echoed her “One Minneapolis” campaign theme of finding ways to eliminate persistent opportunity gaps in education, housing and job opportunities between white citizens and those of color.

“Being more than great, and ending these disparities, is the smart thing to do,” said Hodges of the city’s goals, “because when we do it, there will be no end to growth or greatness as One Minneapolis.”

“Every elected leader in this Rotunda today,” she said, “was sent here by the people of Minneapolis to do three things:

Hodges outlined an ambitious goal: “To grow our city, and make it more than great, means above all that we must grow a population where 500,000 people—no, 500,001 and more people—live and thrive in Minneapolis, with the greatest density along transit corridors. . . .

“It also means that in every part of Minneapolis, we must maintain and grow the middle-class backbone of our city,” she said. “That backbone is the envy of every other city in the country. It has kept us strong and it will make us stronger.”

The new mayor also praised her predecessor and alluded to his weekend health episode: “Over the past decade, we have been great at running the city well. No one played a larger role in that than R.T. Rybak, who we miss here today and wish a speedy—but thorough!—recovery.

“We ran the city well not by luck, though, but through hard work and our willingness to make tough choices.”

She also offered snapshots of a reinvigorated city:

The swearing-in ceremony also included the new Minneapolis City Council, with seven newcomers—a majority of the 13 members—including three firsts: a Somali immigrant, a Hmong-American and a member of the Latino community.

“We can learn much from these newcomers—entrepreneurship, hard work, respect for education and care for their families are some of the qualities I really admire,” she said.