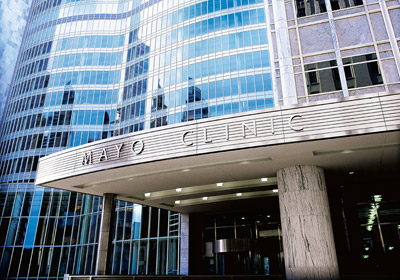 Mayo Has Landed $135M In 2016 Federal Research Funds To Date

A look at the Rochester clinic’s Top 10 National Institutes of Health awards.
July 02, 2016

The Mayo Clinic made headlines last month with the announcement that it had won a five-year, $142 million award from the U.S. National Institute of Health to serve as the “biobank” of human samples for a million-patient government study to advance precision medicine.

But the big grant for the Precision Medicine Initiative got TCB to thinking: What other NIH awards have come Mayo’s way so far in the federal government's fiscal 2016? And how much are they worth?

After some digging, we found the answer is (perhaps unsurprisingly) impressive: So far this year, Mayo researchers attracted $135.4 million in NIH funding spread over 241 grants for its campuses in Rochester; Jacksonville, Florida; and Scottsdale, Arizona.

In reviewing Mayo’s top 10 NIH awards so far in 2016 in terms of dollar amount, the biggest, as expected, is from the Precision Medicine Initiative (PMI), which netted the clinic $14.8 million for this year. Its principal investigator is Stephen Thibodeau, a Mayo professor of laboratory medicine and pathology and a co-director of its Molecular Genetics Laboratory.

The PMI will tap the capabilities of Mayo Medical Laboratories, a for-profit subsidiary of the clinic operated out of its Department of Laboratory Medicine and Pathology that has in itself become the third-largest provider of lab services in the United States. Under the grant, the Mayo lab will “efficiently and cost-effectively support the activities of the PMI with respect to the Biobank, namely, biospecimen collection, kit assembly, biospecimen accessioning, tracking, processing, quality assurance, storage, and distribution.”

Several others of Mayo’s biggest NIH grants for 2016 are to fund similar ongoing research programs, some of have been tapped annually for multiple years. Here’s how they ranked, starting with No. 2.

2. Statistics and Data Center for the Alliance for Clinical Trials in Oncology, $7.3 million. Funded annually since 2014, the Mayo-maintained data center is responsible for the statistical, data management, and information technology activities that support the scientific agenda of the Alliance for Clinical Trials in Oncology, a national cancer research organization. Mayo says this data coordination “leads to the translation of basic and clinical research into trials of new therapies that have the potential to change clinical practice, resulting in improved outcomes for cancer patients worldwide.”

3. CREST-2 Clinical Coordinating Center, Jacksonville, $6.3 million. CREST-2 is a major study meant to advance primary prevention of stroke in patients at risk for stroke due to atherosclerosis (the buildup of fats, cholesterol and other substances) in the heart’s carotid artery, which results in stenosis, or the narrowing of the artery. The CREST-2 study aims to compare the benefits of intensive management of high cholesterol through medication and modifying risk behaviors vs. invasive surgical procedures such as carotid endarterectomy and installing stents. Should intensive medical management be declared non-inferior to endarterectomy, stenting or both, up to 5,000 strokes may be prevented per year.

4. Mayo Comprehensive Cancer Center Grant, $5.8 million. The Mayo Clinic Cancer Center (MCCC) has been funded by the NIH and its National Cancer Institute by at least $1 million annually since 1985, including $5.8 million this year. The MCCC is made up of 351 members from 87 departments and divisions based in Rochester, Jacksonville and Scottsdale. Its latest emphasis is “a major cross-programmatic effort” to build on recent research of the cancer genome with the development of “new genome-guided therapy approaches.”

5. Longitudinal Evaluation of Familial Frontotemporal Dementia Subjects (LEFFTDS), $3.4 million. Frontotemporal lobar degeneration (FTLD) is a neurodegenerative disorder that produces behavioral changes and dementia, sometimes also associated with parkinsonism and/or amyotrophic lateral sclerosis. FTLD is at least as common as Alzheimer's disease in people under the age of 65, and is usually inherited. In this study, researchers are focusing on 300 members of families with a known genetic mutation to identify which measures are best for assessing the efficacy of potential disease-modifying or preventative therapies.

6. Cellular Senescence and Aging, $1.94 million. Cellular senescence is the condition when cells stop growing, and while there is as yet no definitive evidence, it is suspected as a contributor to age-related dysfunction. This effort focuses on a secretion associated with senescence and cell inflammation that Mayo researchers believe could underlie many age-related diseases and frailty. They have identified a link between the secretion and immune system dysfunction, and have found potential ways to break this link.

7. Mayo Alzheimer’s Disease Research Center, $1.91 million. The Mayo Alzheimer's Disease Research Center is working toward a national goal of achieving effective treatment and prevention of the disease by 2025. Its current projects include improving clinical prediction of dementia by using magnetic imaging; inhibiting the “sticking together” of the protein hyper-phosphorylated tau, which causes nerve cell degeneration; and an investigation of the role played by the protein ApoE and its receptors in the formation of Alzheimer’s disease.

8. Physiology of Bone Metabolism in an Aging Population, $1.75 million. This is a long-running effort funded by the National Institute on Aging to plug significant gaps in the clinical and basic understanding of osteoporosis, or age-related bone loss. Mayo researchers are focusing on a trio of projects centering around how the sympathetic nervous system regulates bone metabolism. One area being studied is how sympathetic outflow contributes to impaired bone formation in estrogen-deficient post-menopausal women.

9. Clinical Implementation of Clopidogrel Pharmacogenetics: The Tailor-PCI Trial, $1.72 million.  Clopidogrel in combination with aspirin is the most commonly prescribed drug used in percutaneous coronary intervention (PCI), the regimen used to treat coronary artery disease by reducing platelet counts. However, about 30 percent of Caucasians and 50 percent of Asians have genetic variations that cause undesirable reactions. These patients can be identified through genotyping, but it’s not widely done due to a lack of clinical evidence. To address this gap Mayo is performing a large randomized trial of genotyping vs. routine care within existing PCI clinical practice settings.

10.  National Clinical Trials Network, U10 Network Lead Academic Participating Site Grant, $1.3 million. Mayo is a lead academic institution of the National Clinical Trials Network (NCTN), formed by the National Cancer Institute in 2014 to respond to recent advances in deciphering the cancer genome, which has fundamentally changed its approach to cancer research. One of its sub-groups is the Alliance for Clinical Trials in Oncology, which is cited above (item 2). In addition to the $7.3 million Mayo received to manage the Alliance’s data, it got a further $1.3 million to support NCTN clinical trials and other activities related to its participation in the Alliance.