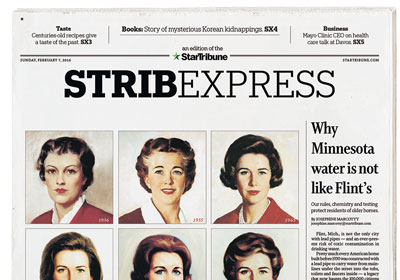 Maybe Print Isn’t Dead After All

The death knell for the newspaper business has been ringing for years. “Print is dead!” say the digital diehards. But the Star Tribune Media Co. is actually boosting the circulation of its free weekly StribExpress from 85,000 copies to 100,000 copies.

StribExpress is six-page paper that serves as a binder of sorts for advertising: inserts, circulars and coupons provided to the newspaper by the advertiser. It launched in 2010 with a modest circulation of 20,000 copies. The articles in it are stories that have already appeared in the daily paper.

While many might see StribExpress as a throwaway, Yaeger notes that it’s only delivered to people who request it, an important selling point for advertisers. Paul Kasbohm, chief revenue officer for Star Tribune, says StribExpress was created in direct response to advertisers who wanted to reach more homes in certain zip codes than the newspaper delivers papers to.

Kasbohm says it’s evidence that old-school print still works. “Preprints continue to be one of the most effective and utilized advertising vehicles in terms of driving shopping behavior,” he says, and notes that StribExpress is tailored to a specific audience: “the female decision-maker of the household.”

StribExpress is hardly the only non-daily in the company’s 12-publication niche portfolio. It includes Homes magazine and The Good Life, a quarterly aimed at seniors. Since 2004, the paper has also published Twin Cities Values, a free four-page weekly designed to house advertising inserts and circulars, with circulation of about a half-million copies. It is delivered en masse by mail and newspaper carriers to non-newspaper subscribers; customers have to “opt out” by telling the newspaper to stop delivery.

The privately held company does not disclose revenue. Billionaire Glen Taylor bought the company in 2014. The following year the newspaper acquired City Pages, which distributes 50,000 free copies every week—half the circulation of StribExpress.

In-mid April, the company announced it was investing in an upgrade of its printing plant in the North Loop. Says Kasbohm: “$5 million is a lot of money for us. I think you can read that appropriately as a signal that print is important to us.” —Burl Gilyard