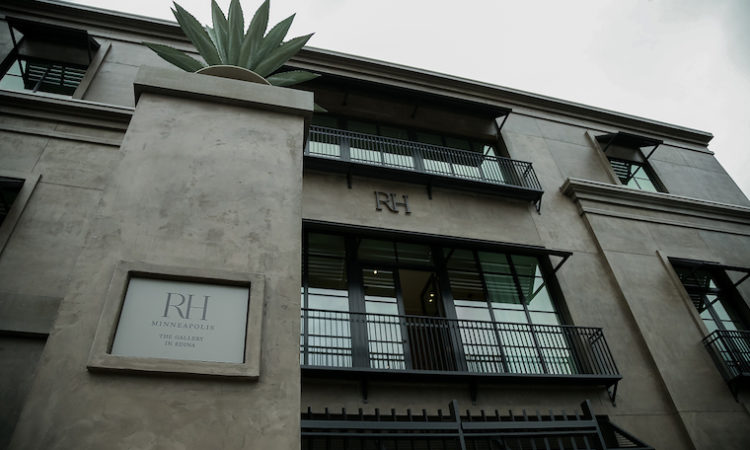 Making Sense of the Restoration Hardware Mansion in Edina

A look inside the furniture retailer's glamorous new three-level store and the strategy behind it.
By Allison Kaplan
September 30, 2019

“What is this furniture castle?”

My teenager accompanied me to the new RH store in Edina over the weekend, because it was that or stay home and clean his room. On the ride over, he buried his head in Snapchat and tuned out my briefing about Restoration Hardware’s audacious strategy of transforming itself into a lifestyle brand and building gigantic, castle-like showrooms at a time when other established retailers are downsizing or declaring bankruptcy. But as we entered the three-level matte charcoal manse with its imposing Grecian sculptures and white sofas so deep your feet won’t touch the ground, my son couldn’t help but look up. “This is a store?”

It is the store of visionary CEO Gary Friedman’s wildest dreams and deepest convictions about retail today needing to be a destination, and deliver a big wow. “We are moving from creating and selling products to conceptualizing and selling spaces,” he told Forbes earlier this year when the company, which now goes by RH, opened one of its superstores —they call them RH Galleries—in New York’s trendy Meatpacking District. Chicago, Boston, West Palm Beach and West Hollywood also boast RH Galleries. 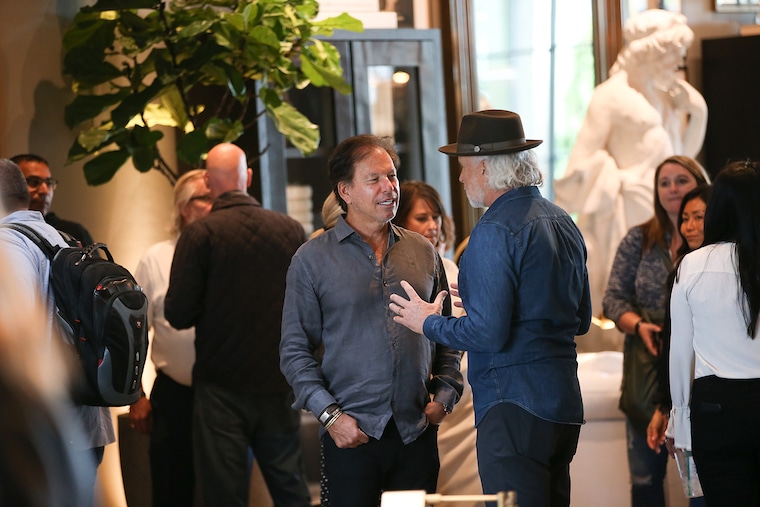 I would have asked Friedman about his strategy myself, but my interview request was declined. A publicist told me not to take it personally—that Friedman was traveling and not doing any interviews about his latest store opening in Edina. That’s in contrast to the Nordstrom brothers, whom I recall meeting with reporters and mingling with guests at the opening of their Ridgedale Center store a few years back—the last retail opening that inspired locals to show up in sequins. While other brands of similar size and scale to RH have marketing directors or a director of stores to field press calls, Friedman is the only person at RH authorized to speak to the media.

Friedman did attend a glittery opening party on Thursday night that attracted the sort of VIP crowd every charity in town would salivate over hosting at its fundraising galas. Attendees snapped photos of Friedman as he held court on a modular Italian linen sectional and followed him around like he was a rock star. Which, in the challenging world of retail today, he sort of is.

A publicly traded company, RH shares are up an eye-popping 28 percent so far this year with gains the past four quarters running and $2.67 billion in revenues for the current fiscal year. Friedman has his share of doubters—see the aforementioned Forbes piece—who worry that the pace and expense of building superstores—er, galleries— is not sustainable. Some go so far as to suggest that fancy manipulation of the numbers is making RH look more prosperous than it actually is. Based on the line that snaked around the building for the opening party, people will show up for a brand that goes big. The question is, will they actually go home with furniture?

Standing nearly 60,000 square feet in the southwest corner of the Southdale Center parking lot, the new RH Minneapolis is more than three times the size of the old Restoration Hardware store across the street at the Galleria. Although surrounded by surface parking spots that rarely get filled to the outer edges of the mall property these days, RH offers its own valet parking, $10 per car. 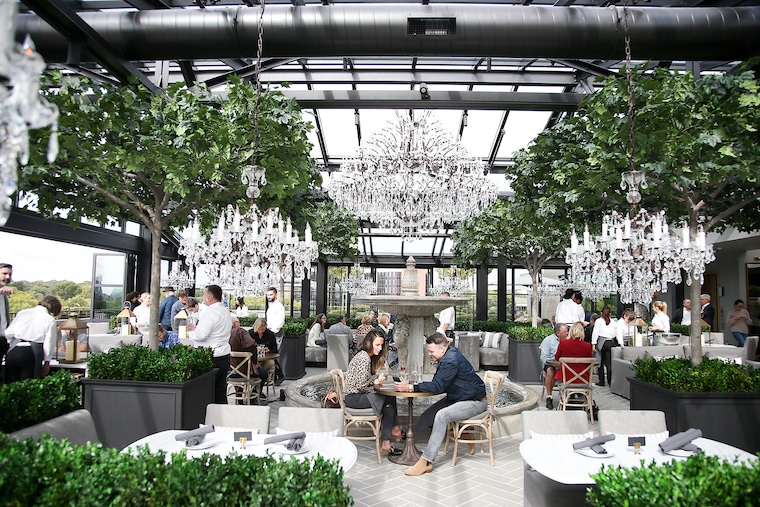 Rooftop restaurant at RH in Edina.

The store resembles a mansion not only in size but layout with perfectly symmetrical room after room of meticulously set living vignettes. Given the stark lack of color beyond the gray, white and metallics, it can be a bit challenging to tell one oversized sofa or swivel chair from the next. The second floor features the company’s newer line, RH Modern, which features similar large-scale pieces done in lower frames and sleeker lines, along with interior design consultation spaces. (The Edina store does not include RH Teen, which is available online and in some other markets.) The top floor is the crown jewel: a rooftop restaurant featuring glass walls and ceilings dripping with crystal chandeliers, central fountains, heritage olive trees, a coffee bar and outdoor lounge areas. Entrees range from around $18 to $30, including a $21 burger.

The restaurant and store were moderately busy on Sunday, even during a Vikings game. There seemed to be as many RH employees as there were customers—they looked very Busy and Important, wearing head sets and clutching iPads and whispering among themselves. I received a few nod and tight smiles, but no one asked how I was or offered assistance. I got the sense that I had been pegged as someone not in the market for a $16,000 sofa and was being watched. And to be fair, I saw more people posing for selfies than measuring sofa depth as one might expect at a traditional furniture store. But then, that’s the whole point of creating an aspirational lifstyle environment, isn’t it? Still, I quickly swatted my son’s sneakers off an ottoman for fear of getting kicked out. An RH associate appeared mere seconds after he stood up to fluff the seat cushion.

I’ll go back to RH—for an indulgent lunch or drinks on the rooftop deck, or as a point of interest for out of town visitors, the same way tourists flock to RH in Chicago. Is that enough? Clearly, RH knows this market from its years at Galleria and on Grand Avenue in St. Paul and must be confident that we will buy enough $21 burgers and $16,000 sofas to justify this monolithic store. And I hope it’s true. I fear a world where the only reason to leave the house is to return unwanted Amazon orders to an anonymous locker. It makes me sad to see the emptiness within the center of Southdale—birthplace of the covered mall. So watching the perimeter become the new center court, with the opening of RH, along with Smash Burger, a hotel, condo, and soon, the new Life Time Resort including fitness center, spa, rooftop pool and co-working space, provides hope that these valuable pieces of suburban real estate will remain vital and won’t be turned into boring office parks, or worse yet, left vacant. So cheer on RH for creating a memorable destination. If this is the future of retail, it’s beautiful.