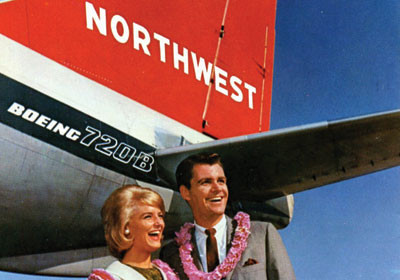 Twin Cities fans of the iconic AMC cable series Mad Men were surprised to see the pivotal role that Northwest Airlines played in an episode that aired this spring. Advertising exec Roger Sterling, conducting a romance with a Northwest airport employee in New York, persuaded her to use her job in a first-class lounge to bird-dog clients for the agency. And it landed Sterling Chevrolet.

The plot was less memorable, though, than the meticulous period airline details, from mini-skirt uniforms to Northwest branding and iconography to video images of Northwest 707s pushing back from gates. Mad Men’s producers reached out for assistance to the Bloomington-based NWA History Centre, a museum and repository of the airline’s history.

There they encountered volunteer Jerry Nielsen, who was “completely unaware of the show,” he says, and even now doesn’t seem to quite appreciate its celebrity in popular culture. “I was contacted by their art department,” he notes. “They were looking for ticket jackets.”

The center’s Bob DuBert says the episode was set right before Northwest underwent a total image makeover in 1969, becoming Northwest Orient, which lasted until the Republic merger 17 years later. He says Mad Men got the logos and signage right, but doubts the mini-skirted red uniforms were authentic. “Flight attendant uniforms were green then, and they were never that short.” He suspects the airplane footage was made using CGI technology. “You can find old pictures of Northwest planes anywhere.” (Mad Men is in a production hiatus and producers were not available for interviews.)

In ’68, commercial aviation was still regulated, meaning airlines received government assignments to fly routes. Northwest did fly JFK to Detroit, but so did American and other carriers. DuBert thinks Mad Men chose Northwest because extant carriers like American might object to portrayals of its employees in the misconduct the Northwest staffer engaged in (romance with a customer, eavesdropping on customers, and misrouting customer luggage).