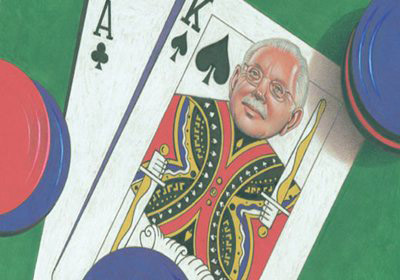 The deal, expected to close by year's end, will mark a transition away from executive life for the gaming magnate.
February 05, 2015
Lyle Berman, the local entrepreneur and a titan of the gambling scene, is taking a slight step back. On Monday, he announced plans for his Minnetonka-based Lakes Entertainment Inc. to merge with Las Vegas-based Golden Gaming LLC in a deal that will see Golden Gaming become a wholly owned subsidiary of Lakes.
Lakes will meanwhile remain publicly traded and be renamed Golden Entertainment, Inc. upon its closing.
“I'm probably winding down a little in this business community here,” Berman said in an interview. Berman, who grew up in the Twin Cities but is now a Nevada resident, said he might take on a more active role in pursuing additional investment opportunities in the future but added that this is “clearly a new phase in my business life.”

Golden Gaming CEO Blake Sartini will be named chairman and CEO of the combined company. Berman will continue as a board member and sign a three-year consulting agreement with the new firm. Lakes President and Chief Financial Officer Tim Cope will also continue as a board member and consultant.
Both firms said in a news release Monday they expect Lakes' cash on hand to facilitate Golden Gaming's pursuit of growth opportunities and help refinance its debt. In a subsequent interview, Berman said that Lakes had about $80 million in cash on its balance sheet as a result of ending its 13-year contract with the Jamul Indian Village to build a casino in San Diego in 2012. As a result of that termination, he said, Lakes made it clear the past 18 to 24 months that it was looking to redefine itself. Berman called the Golden merger a “unique opportunity.”
Golden Entertainment will operate roughly 9,250 slot machines and video lottery terminals in Nevada and Maryland across four casino properties and more than 600 route locations. On a combined pro forma basis, 2015 net revenues are expected to be $348.1 million.
Lakes began as Grand Casinos Inc., which Berman founded in Hinckley in 1991. A longtime poker player who has earned nearly $1.6 million in World Series of Poker competition, Berman launched the World Poker Tour in 2003. He has also served executive stints with PokerTek and Rainforest CafÃ© Inc., which he first opened at the Mall of America in 1993.