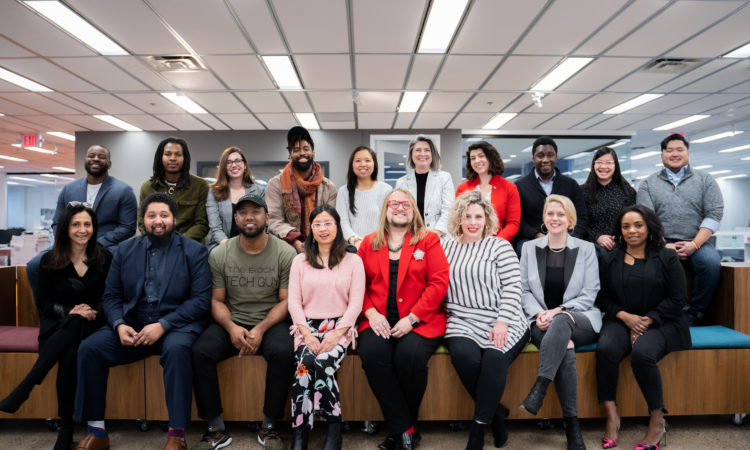 Lunar Startups Strikes Out on Its Own

The startup accelerator for historically marginalized entrepreneurs continues its mission, but with added emphasis on tech and consumer packaged goods companies.
By Tess Allen
November 12, 2020

When Danielle Steer launched Lunar Startups in St. Paul almost three years ago, one of her key goals was to remove barriers and reduce disparities for historically marginalized entrepreneurs. She never imagined that by late 2020, those obstacles would actually have grown.

Initially created as a project of the Knight Foundation and the Glen Nelson Center at American Public Media (APM), Lunar announced today that it is spinning off this month as an independent nonprofit under the name Lunar Inc.— in the midst of a contentious presidential election, a global pandemic and resulting recession, and a social reckoning. While the process started months before Covid-19 swept into Minnesota, Steer says the timing couldn’t be better.

“We believe that scaled-up, inclusive entrepreneurship is the most important path forward in building community wealth, mitigating race- and gender-based economic gaps, and increasing the number of high-quality jobs available for women, people of color, and other marginalized professionals in the Twin Cities region and beyond,” Steer says.

Going forward, the organization, which will continue doing business under the name Lunar Startups, will continue to focus on underinvested entrepreneurs—namely, those who identify as BIPOC (Black, Indigenous, People of Color), female, LGBTQ+, and/or non-binary. But it’s honing its focus to concentrate on technology and consumer packaged goods companies—industries its found to be the most lucrative.

“The Knight Foundation and APM provided a critical and supportive launchpad for Lunar,” Steer says, “yet, as we grow our ambition, our ability to wholly focus on our own mission of creating economic opportunity and entrepreneurial capabilities is best met as an independent entity.” The Knight Foundation and APM have been supportive of Lunar’s move to independence, Steer adds.

Enough support to go around

Educational services company Creatively Focused is one of the local beneficiaries. When founder Elizabeth Orme joined Lunar’s accelerator program in March 2019, she had only six employees and two contractors, and she hadn’t raised a dollar in funding. Since then, her St. Paul-based company has created 14 new jobs with benefits, added nine contractors, earned $1.2 million in annual revenue, received $400,000 in grants, built the business plan and wireframes for an AI-powered technology platform, created a strategic plan to raise $1 million in blended capital, and is on track to expand into three new industries nationwide.

“From founders to future employees of their startups, Lunar is creating an ecosystem in which those who are typically underestimated are elevated and celebrated,” Orme says. “Lunar moved me from founder to CEO.”

As of September, more than 25 percent of U.S. adults surveyed by Pew Research Center said that they or someone in their household had been laid off or lost their job because of the Covid-19 outbreak. Yelp’s latest economic impact report published in September shows that 60 percent of business closures because of the pandemic are now permanent, so those jobs won’t be coming back.

Steer believes that creating more jobs via startups and new businesses can help fill this gap in job opportunities. And its continued focus on historically marginalized entrepreneurs is perhaps more vital than ever, Steer says.

While Covid-related job losses have affected all Americans, nonprofit newsroom ProPublica published research that shows that Black, Latino, other people of color, and women have seen especially steep employment declines. These groups were already on unequal footing with their white counterparts before the pandemic, but now, both the pandemic and the civil uprising that started after George Floyd’s death in May have made prosperity gaps between Black and white populations more glaring.

Plus, Minneapolis has one of the worst examples of racial disparity in the U.S. According to research by the American Community Survey published in The Washington Post in June, the economic gap between Black and white families is higher in Minneapolis than nearly anywhere else in the country (behind only Milwaukee); a typical Black household in Minneapolis earns only 44 percent of what its white counterpart does.

“But this extreme racial imbalance in Minneapolis is also its biggest opportunity for change,” Steer says. “Clearly, by failing to address significant racial- and gender-based economic gaps, our metro and nation are missing out on key drivers of economic growth.”

The Center of Global Policy estimates that lack of investment in entrepreneurs of color has cost the U.S. economy nearly 9 million jobs and $300 billion. Lunar Inc.’s goal is to recover part of that loss.

To support its spin-off as an independent entity, Lunar is also launching a fundraising campaign this month. The Titan Campaign, set to run through 2023, has a goal of $2 million.

“Lunar has a big ambition in creating a more inclusive entrepreneurial ecosystem while also creating a more sustainable and resilient nonprofit, decreasing our overall dependence on philanthropic support,” Steer says. “We think we have a pretty good case for why a new nonprofit like ours is what our community needs.”