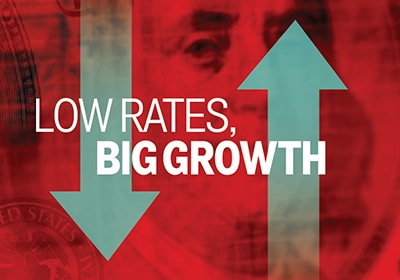 Capitalizing on favorable interest rates, businesses are securing bank loans to expand their companies through acquisitions and equipment purchases.
November 10, 2016

Kris Kowalski Christiansen and her mother had driven to work past a shuttered Rainbow supermarket in Shoreview for more than a year and wondered: Should we or shouldn’t we?

The family behind Kowalski’s Markets was already constructing a new store in Excelsior, its first in seven years. They had also bought the company’s flagship building on Grand Avenue in St. Paul, with plans for a major expansion and remodel that began last December.

The Shoreview location beckoned, but like other business owners, Kris Kowalski Christiansen and Mary Anne Kowalski wanted to feel sure conditions were right for making another major investment. After talking with trusted advisors, the company pulled the trigger. The company’s leaders decided to purchase the Shoreview property.

In September, they started reaping benefits from their renovation of the St. Paul store. They held a grand opening for the newly-remodeled and enlarged store and will have a bigger footprint for holiday shoppers.

The leadership at Kowalski’s was right about interest rates, which have remained at low levels.

Kowalski’s banks at Wells Fargo, which has seen very strong commercial loan demand in Minnesota over the past 18 months, according to Jim Boerjan, regional vice president for middle-market commercial banking in the state. Customers have been borrowing for new equipment, plant construction, new product lines, and mergers and acquisitions, with recent activity this year stronger than any in the past few years, Boerjan says.

Business owners have grown accustomed to low interest rates, so Wells Fargo bankers have been having lots of conversations with them, educating them on the possibilities of rates finally rising, Boerjan said.

“But I think business owners are still feeling conservative. They still don’t want to make an expansion or make a capital investment without feeling really good about what’s going on in their industry or the overall economy,” he adds.

In the nine states that constitute the mid-American region for Creighton University’s monthly survey of purchasing managers, the economy has continued to bump along at a sluggish pace, particularly in agriculture and energy. The region consists of the states of Arkansas, Iowa, Kansas, Minnesota, Missouri, Nebraska, North Dakota, Oklahoma and South Dakota.

In Minnesota, the Creighton Business Conditions Index declined to 49.4 in August from 51.2 in July. Business losses for metal manufacturers and machinery producers more than offset gains for computer and electronic product manufacturers and food processors in the state, notes economist Ernie Goss of the Lincoln, Neb., university. Overall job growth over the 12 months ending Aug. 31 was 1.5 percent, with manufacturing at 0.2 percent.

“Things are moving forward in a slightly positive way,” summarizes Phillip Trier, Twin Cities’ market president for U.S. Bank. “I don’t think we’ve seen as robust of growth as we had hoped for.”

That said, most of the companies U.S. Bank works with regularly are healthy and posting modest growth in their top-line revenue, he adds. They’re good at managing expenses and most are reinvesting in their businesses via capital expenditures in equipment and technology, Trier says.

Richard Davis, U.S. Bancorp CEO, highlighted “continued strength in commercial loans” in a prepared statement. Growth in total commercial loans jumped by 10.7 percent in the second quarter compared with the same quarter in 2015.

One in particular, Golden Valley-based Koch Cos., was going to replace some equipment in its trucking and truck-leasing entities, but low interest rates also spurred its leadership to pursue a couple of acquisitions.

A longtime U.S. Bank customer, Koch (pronounced “cook” and unrelated to energy company Koch Industries) approached the bank about increasing its line of credit early in 2016, according to CEO Scott Shephard. The business had never looked anywhere else for financing, and landed a good rate, which Shephard declined to share.

The company bought some new tractors and trailers and began to execute the expansion plans it had begun considering in mid-2015.

Koch had a signed letter of intent to purchase a truck-leasing company based in another Midwestern city, and was still negotiating the purchase of a second company at press time, according to Shephard.

Other Twin Cities area banking executives say that businesses continue to refinance debt and borrow for necessary expansion or equipment purchases, but not for much beyond the necessities. Although lending terms have loosened a little, neither borrowers nor lenders have forgotten the pain of the recession. The wait-and-see attitude continues.

The hunt for fixed rates

Many companies are locking in fixed rates on existing debt or seeking fixed rates for real estate and equipment acquisitions, several bankers say. Many who have a proportionately large amount of debt on a floating-rate basis have been seeking out fixed rates for the past 18 months, according to Trier. Banks are only too happy to oblige. “This is a very competitive banking environment, where many banks are competing for the same customer and for the same loan growth,” Trier says.

U.S. Bank hasn’t softened its underwriting standards, however. The bank is very selective in where it will stretch its terms, while trying to be flexible with customers, he adds. Allowing for longer terms at fixed rates may cost the bank some money, but also strengthens relationships with customers, according to Trier.

“We’re relationship lenders,” he says. “It’s worth it for us.”

Competition is so fierce that some banks are offering longer-term fixed rates for terms up to 10 years on larger transactions, according to Dave Rymanowski, chief business banking officer for KleinBank, Chaska. Small businesses are taking advantage of the situation.

“Long and low is what they’re looking for,” Rymanowski says. “The name of the game is to try to differentiate yourself from your competitors.”

The longer-term fixed rates surprised a few clients, as banks haven’t been heavily advertising them, if at all.

“It’s not a secret—a little dash of secret sauce, but really not,” Rymanowski says.

“There are probably some banks that won’t do that. There are a lot that will, and maybe in a couple different ways.”

Customers need to remember that while locking in lower rates can help the balance sheet for a few years, they might not want to fix them at one rate for too long, adds Peter Bridston, East Metro commercial team leader for Associated Bank. Their businesses might change, and paying off a fixed-rate loan before the term is up carries substantial prepayment penalties.

Most Americans cannot remember what it was like to live in a higher interest-rate environment, says David Norris, market president of Alerus Financial for Minnesota.

He believes that companies seeking to expand or buy equipment would have done so regardless of continued low rates, although some have begun to consider bigger projects.

“If the company is reviewing entering into or expanding into a new market, and there is an investment needed either for plant or equipment, I think those types of decisions might be getting more consideration now,” Norris says.

Grand Forks-based Alerus has made some equipment loans to companies that are automating because they either can’t find skilled labor or want to reduce employment costs, he adds.

“If companies can invest in expensive equipment that can eliminate the need for two or three people [whom] they’re having a hard time finding anyway, then they’re making that investment in equipment to become more efficient and productive,” Norris says. “We are seeing a willingness toward those types of investments.”

Some Associated Bank customers are doing the same, according to Bridston.

“Businesses are looking to grow, almost more through acquisition than anything else,” he says. “Not just acquiring other businesses that are competitors or so forth; it might be to acquire a product line, some new locations [or] a customer list,” he adds.

Low interest rates also have prompted some business owners to borrow money to buy out their partners or take over a family business.

“There’s a lot of that going on,” Bridston says. “The prices are high. They’re very expensive. Money is cheap, but buying a business is not, so there’s the tradeoff.”

What is it going to take for Minnesota businesses to do more than what’s necessary to survive? Norris believes that industry leaders need to make additional investments in their businesses so other companies would make investments to meet the demand.

“We do have customers who are doing well but are still apprehensive to grow because they’re not sure that the footing is solid,” Norris says. “As soon as the machinery starts turning, I think demand across the various industries would increase.”

“We’ve been in a very low-rate environment now for nearly a decade, and I think our customers need to see more demand for their goods and services before they’re able to make what I call meaningful investments,” he concludes.