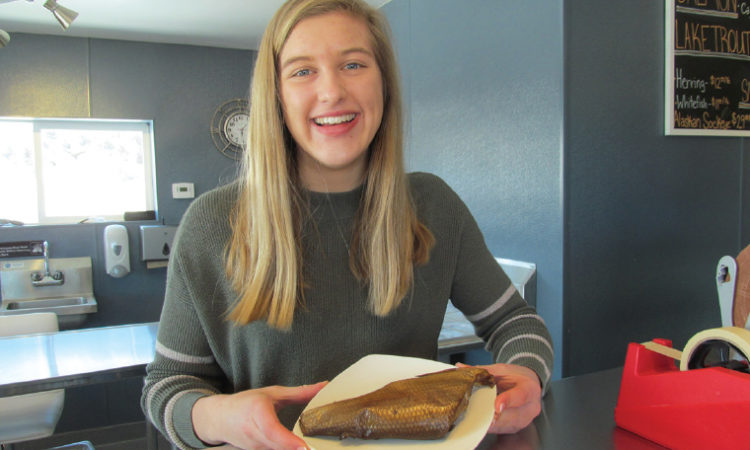 A North Shore icon gets a breath of new life from a teenager.
By Gene Rebeck
June 13, 2019

Like most entrepreneurs, Ashleigh Swanson prefers learning by doing. She’s always been fascinated with business, and both of her parents are entrepreneurs.

Last July, she reopened Lou’s Fish House, a smoked-fish shop in Two Harbors. Swanson had never run a business before. She was all of 16.

Still, she turned a profit. The shop has a prime location on Highway 61 in the heart of the town. And though the shop itself is just 400 square feet, a stylishly retro neon sign is a powerful lure.

Plus, the Lou’s brand has cachet. The shop’s interior has been updated, but the fish is probably as tasty as Martha Stewart remembers it. In 2010, Martha Stewart Living declared it the best smoked-fish house in the U.S. (Founder Lou Sjoberg passed away and legal problems caused his successor to close in 2014.)

Swanson’s family has been a big help. Her father, Chris, owns a digital marketing company; her equally entrepreneurial mother, Rebecca, bought the Lou’s property in order to convert the motel connected to the shop into a stylish Airbnb called Vine and Branches. Originally, Ashleigh was going to run a little ice cream shop in the space, but pivoted after speaking to a specialist in fish smoking.

Swanson sources shrimp and wild-caught salmon from Alaska, but most of the rest is local, including several species provided by independent fishermen working on Lake Superior. Swanson also has learned how to smoke her own, using locally cut maple. She also has a sense of marketing that Martha Stewart would applaud, elegantly wrapping each piece of fish in butcher paper.

When she turns 18 this fall, Swanson will take full ownership. She graduates high school in a year and has been taking business-related courses at Lake Superior College in Duluth. During the summer, Lou’s is open seven days a week (weekends the rest of the year). So one of the entrepreneurship lessons she’s learned is the complex art of multitasking.

“I really love learning about how things work—how you can have something totally planned out and you have to improvise and shift your plan,” Swanson says. “You can go to college and study this stuff. But sometimes, you just have to get in and experience it.”