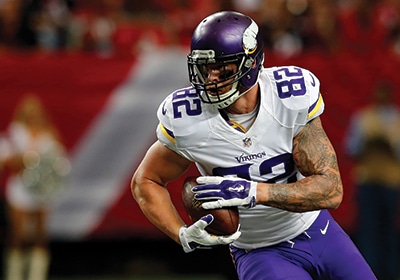 Lola Red is a boutique public relations and marketing firm known for its high-profile clients, which include Mall of America and Life Time Fitness. But now it’s decided to tackle a new clientele that comes with different brand challenges.

So far Lola Pro’s lineup includes several names from the NFL, including Kyle Rudolph of the Minnesota Vikings, Marcus Williams of the New York Jets and Tim Hightower of the New Orleans Saints.

For Vikings tight end Rudolph, that has meant getting him media exposure beyond ESPN. His wedding to wife Jordan was covered in several bridal magazines, and the announcement that the couple are expecting twin girls was picked up by national media and earned 8 billion media impressions, says Walsko. And his charitable work for the University of Minnesota Masonic Children’s Hospital got a profile boost when Lola Pro worked with the hospital to set up a draft party that raised money for a wing of the hospital that will be called Kyle Rudolph’s End Zone.

Companies want to be associated with successful athletes—and they’re willing to pay millions for the privilege. While Lola Pro can’t change on-field performance, it can promote what athletes do off the field to make them more enticing to sponsors, giving them a chance to pad their earnings during their brief window as players, and perhaps beyond.

The goal is to expand an athlete’s brand. “It builds a greater, more holistic picture for these athletes that they can leverage during their time in the game and after they retire,” Walsko said. “Overall, we help them maximize their time in the spotlight and use that to the advantage of the organizations they work with and themselves.”

It’s also a path to a more consistent and reliable income stream than the NFL offers.

“For a very small percentage of athletes, sponsors are not hard to find. In fact, many companies often come to them,” Walsko said. “But for the majority of athletes, generating consistent, valuable marketing opportunities takes work.”