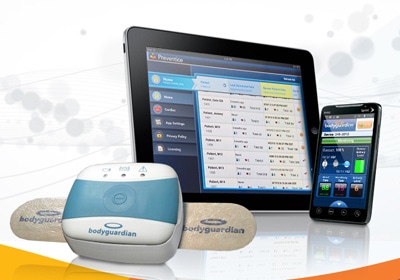 Preventice’s BodyGuardian Remote Monitoring System allows doctors to monitor patients’ heart rates via wireless technology, and the company plans to make the product commercially available by the end of this year.
September 21, 2012

A locally developed remote heart-monitoring system—which sends patient data to doctors’ iPads and other mobile devices—has been given the green light by federal regulators.

Minneapolis-based Preventice, Inc., said Monday that it has received clearance from the U.S. Food and Drug Administration (FDA) to market and sell its BodyGuardian Remote Monitoring System to hospitals and clinics.

The system, which was developed in collaboration with the Rochester-based Mayo Clinic, includes a small sensor that is attached to a patient’s chest and collects data including heart rate, respiration rate, and activity level. The information is wirelessly transmitted to doctors’ mobile phones, iPads, and other devices, and doctors can receive alerts based on changes in certain metrics.

The FDA approval allows Preventice to sell the system to hospitals and clinics, whose doctors will prescribe the system to patients with abnormal heart rhythms. However, the product is not yet commercially available. Preventice spokeswoman Colleen Kulhanek said Tuesday that the company is finalizing pricing and packaging, and it is awaiting the results of a clinical trial currently being conducted at the Mayo Clinic. The company plans to have the system on the market by the end of the year.

Until now, Preventice has performed contract development services for clients, and the BodyGuardian system represents the first product that the company will market as its own. Preventice plans to sell the monitoring system in the United States and Europe, Kulhanek said.

“We are thrilled that the FDA has provided clearance for the BodyGuardian RMS, enabling Preventice to bring to market a real-time, remote connection between physicians and patients,” Preventice President and CEO Jon Otterstatter said in a statement. “Our vision at Preventice has been to maximize this industry-leading collaboration into a solution that enables health care providers to extend and improve care for their patients, where they live.”

Preventice said that it licensed certain algorithms used by the BodyGuardian system from the Mayo Clinic, which has “a financial interest” in the technology and will use revenue from the product to fund education and research.

Preventice said that the adoption of wireless monitoring is growing rapidly, and a recent study found that it is currently being used by 2.2 million patients worldwide. That number is expected to grow to nearly 5 million by 2016, according to the company.