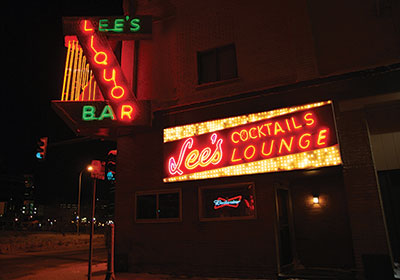 Local Entrepreneur Takes Over Dive Bar To Save It

Local entrepreneur buying bar to “save a piece of Minneapolis.”
July 09, 2015

As Craig Kruckeberg puts it, he’s got “a full plate.”

The CEO and owner of Blooming Prairie-based Minimizer, a polyethylene fender manufacturer for heavy-duty trucks, was recognized as a 2013 TCB Entrepreneur of the Year; he also owns printer KIK Graphics and two semi-truck race teams in the Meritor Championship Truck World Series. Now he’s added an old-timer bar.

“I quickly developed a love” for Lee’s Liquor Lounge, Kruckeberg admits. When he heard Nye’s was closing, he says that’s when he really started to push 80-year-old owner Louie Sirian] to sell Lee’s.

He insists the purchase had no connection to a soccer stadium scheduled to break ground nearby. “We started long before that was announced, over a year ago. And I don’t plan on tearing it down and putting condos there either.”

His true affinity for Lee’s came five or six years ago when he was looking for a spot to drink downtown, he says. “I wanted to find a place where you could walk in and people wouldn’t go ‘Oh my God, whose dad just walked in?’ ”

Lee’s reminded Kruckeberg of homey small-town bars, an atmosphere he aims to uphold. Thus the North Loop watering hole won’t receive a major overhaul in terms of operation and appearance.

Marketing—something not in the current Lee’s lexicon—could be on the horizon, however, specifically a trio of billboards near the bar. “I could put an arrow on each one and have them all point at Lee’s,” Kruckeberg says, punctuating his statement with a laugh. “Likely I’ll only buy one, though, because they’re five grand a month each.”

Kruckeberg has a history in hospitality. His parents owned restaurants and bars, prompting Kruckeberg to attend culinary school. “My endgame was to manage a resort—a hotel, restaurant, everything.”

Instead he got a vintage bar on some potentially valuable land. The sale, contingent on a liquor license transfer, was expected to close as this issue of TCB went to press.