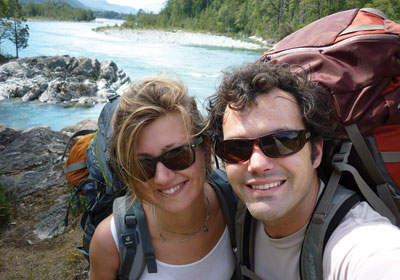 Travel entrepreneurs and married couple Tara and Jordan Harvey eschew the word “tourism.” To them, the word suggests looking at photographable sites and “colorful” natives, then going home the same travel consumer that you were when you first boarded the plane.

The Harveys’ travel start-up, Minneapolis-based Knowmad Adventures, seek to promote “an experience of other people’s cultures and other people’s worlds,” Tara Harvey says. What Knowmad’s founders believe makes them distinctive is a sensitivity to local culture, along with a hiking-boots-on-the-ground knowledge of lesser-known lodges and locales.

The Orono natives caught wanderlust early—Jordan as a high-schooler traveling to Latin America, Tara as a college double-major in art history and Spanish who studied in Spain. After college, they backpacked through Asia and South America, taught English in Thailand, got engaged, and considered ways that they could (in Jordan’s words) “keep the adventure going.”

Uncertain of the next leg in their professional journey, they returned to Minnesota. Jordan took a job selling software as a way to learn about business while getting paid for it. Tara pursued a degree in graphic design, suspecting that it would come in handy for whatever business she and Jordan would end up starting.

It did, though that business didn’t reveal itself right away. After a couple of years selling software, Jordan took a job doing PR and marketing for an adventure race in Patagonia; Tara took her first trip to Chile to join him.

“I saw that there weren’t a lot of people doing trips there,” Jordan recalls. He and Tara considered buying land there and opening a lodge, but as Tara says, “we didn’t want to lock ourselves down to one country.” They were coming into a clearing in the jungle of their ambitions: They would start a travel business, specializing in South America. But they’d take small steps and focus on Chile, which they saw as an underserved market. Knowmad Adventures opened for business in November 2009. Tara put her graphic design skills to work creating marketing materials and a Web site for the fledgling company.

While travel and tour planning is a highly competitive industry, the Harveys saw a niche that they could carve out. Many tour operators, Jordan believes, organize trips “that had become very cookie-cutter, and cookie-cutter means that the experience wasn’t very authentic.” Instead of offering standard group tours and packaged travel, Knowmad customizes travel for individuals, families, and small groups. These trips can range from arduous hikes in the Andes to visits to Chilean wineries.

At the same time, the Harveys believe they can offer competitive prices for their trips by dealing directly with lodge operators and guides, rather than through layers of organizers both in the U.S. and in South America.

Suzette Sontag took an trip to Chile (her first) with her husband last March that Knowmad organized. “They tailored it to what we wanted to see,” says Sontag, who operates a horse farm near Somerset, Wisconsin; her husband farms. “We wanted to see agriculture.” The trip included visits to Chilean farms and vineyards, as well as stops on an island and a desert. Knowmad “took care of everything,” Sontag says.

In 2011, the Harveys branched out into Peru and Ecuador, countries where they’ve been facing more competition. They hope to expand into Colombia as well, following their same small-scale, customized model.

Knowmad made about $250,000 in revenues in 2011; the Harveys project a million for this year. Since Knowmad doesn’t have the money for a big marketing push, it will focus on improving the search engine optimization of its Web site. The start-up has had one of its trips featured on travel giant Frommer’s Web site; Jordan Harvey also has contributed to travel sites and blogs in order to build up his company’s reputation as a “credible source” of information.