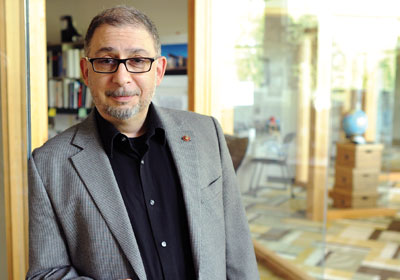 Real estate developers, property managers, and others looking for ways to estimate and strategically reduce the energy costs of new buildings—with the goal of achieving net carbon neutrality—need look no further than their iPhone, thanks to a smart phone application codeveloped by the Weidt Group of Minnetonka and St. Louis–headquartered architectural firm HOK.

The app is the latest development for a firm that has played a pioneering role in the green building movement by helping clients improve buildings’ energy efficiency. Founded in 1977, the Weidt Group provides research, analysis, and software development services to architects, engineers, major manufacturers, and public agencies, which they’ve used to strategically limit and manage energy costs long before construction begins. The company’s 60 staff members complete approximately 230 projects per year from six locations nationwide.

“We started by analyzing the energy use of existing buildings,” explains David Eijadi, a top officer for the Weidt Group. “That led to us work with the [U.S.] Department of Energy on the development of energy modeling software. We also tested existing software manufactured by private companies and provided feedback to help improve it. We’ve written 300 to 350 custom algorithms to address the infinitely creative ways people actually occupy, operate, and maintain buildings.”

The Weidt Group’s early projects gave it a lot of data about how buildings actually perform. So the firm’s next logical step was to develop software that examines and illustrates how buildings can be expected to perform.

“When our Minneapolis office decided energy efficiency would be one of its three main focuses in 1992, we sought out [the Weidt Group] to collaborate with us,” says Rick Carter, senior vice president of Minneapolis-based architecture firm LHB. “They were already using software to predict energy use. We have worked with them ever since. I always advocate adding them to our architectural and engineering teams for research-intensive, sustainable design projects.”

Since 1993, the Weidt Group has provided detailed energy analysis and verification services for more than 500 buildings as part of Xcel Energy’s conservation initiatives, including the University of Minnesota’s TCF Bank Stadium. The firm also has coauthored sustainable building guidelines for State of Minnesota buildings.

The Weidt Group’s new iPhone app points to a new direction for the consultancy. “Instead of becoming a 300-person consulting firm, we want to make better tools and make them available for other professionals interested in doing what we do,” Eijadi says. “Typical energy modeling programs run 10 or so what-if scenarios. We can run 100 or more.”

The philosophy that John Weidt espoused when he founded the firm clearly continues to influence its major strategic decisions: “If the meter isn’t slowing down or spinning backward, we aren’t doing our job.