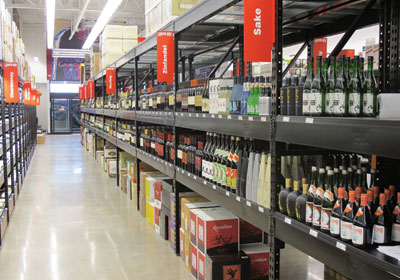 After buying Chicago-Lake Liquors in 2000, he adopted everyday low prices, including for high-end liquor, luring affluent customers from throughout the metro area to the gritty Minneapolis neighborhood. Irreverent marketing campaigns (“Pleasing customers and pissing off competitors since 1959”) increased visibility.

Chicago-Lake has since doubled its annual revenue to more than $15 million, while dramatically increasing profits, Wolf says. Today, the store bills itself as Minnesota’s largest-volume single-location liquor retailer. A couple of years ago, Wolf grew thirsty for expansion. “I wanted,” he says, “to compete with stores with incredibly high prices.”

Wolf set his sights on Minnetonka, but suggests it changed its licensing policy to thwart his entry. Then in late November he opened Liquor Boy, nestled between PetSmart and OfficeMax, and a mere stone’s throw from Costco in St. Louis Park.

At Liquor Boy, the everyday-low-price model is expanded to a new scale. The 10,000-square-foot warehouse-style store features an almost overwhelming selection.

While lower prices typically mean thinner margins, Wolf disputes the assertion that his business is making less money on most products, because, he says, rivals generate most of their revenue through discounted items during temporary sales. Wolf also says buying in huge quantities gives him leverage with suppliers: “I no longer buy Glenlivet [scotch] by the case,” he says, “I buy it by the pallets.”

Beau Farrell, co-owner of Twin Cities chain Haskell’s, insists he holds his own. “Where people can’t compete with us is on service,” Farrell says. “That’s the biggest arrow in our quiver.”

But Wolf is confident he can take an even bigger gulp out of the local market. “The person who’s shopping at Costco—that’s my customer,” he says.