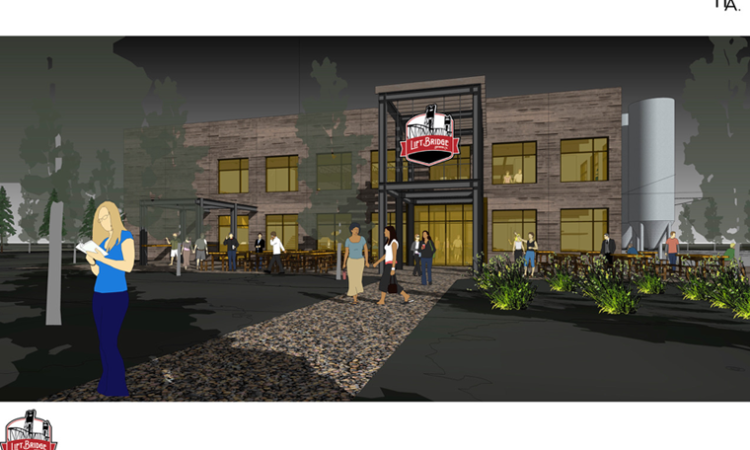 In its 10th anniversary year, the company looks to accommodate growth with expanded physical space for increased production.
By Amanda Ostuni
April 26, 2018

Ten years after Lift Bridge Brewing began operations, the Stillwater-based company has announced an expansion project, to begin this summer. On 5.5 acres of land, the company will build a new production and distribution facility to accommodate projected growth.

Glynn said that at minimum, they’ll roughly double the number of guests they can have in the taproom. The new facility will also feature a patio and outdoor area, as part of an effort to enhance the visitor experience. That effort extends to the taproom design as well.

“Part of our goal is to have the taproom experience be very integrated into the brewery – meaning we’ll have a lot of sightlines into the brewery,” said Glynn. “We want people to smell the grain, hear the packaging equipment and really feel like they’re watching that beer being made.”

Meanwhile, the brew house’s size will more than triple. Whereas their current 15-barrel brewing system produces about 23,000 barrels of beer a year, they’ll be able to use a system of 35 to 50 barrels that will produce 35,000 barrels initially – with the capacity to produce up to 80,000.

The expansion project comes as the company has seen steady growth since its inception in a garage in 2008. Last year, Lift Bridge sales increased by more than 20 percent in Minnesota, and the company brewed double the number of barrels of beer from its 2014 production. Leaders anticipate 20 percent growth over the next five years.

With that in mind, they needed a place to physically accommodate that growth.  In their search, they looked at communities around Stillwater, and even in Wisconsin, but always had an interest in staying in Stillwater.

“Stillwater is where we founded the brewery, where our hearts are as owners,” said Glynn. “We’ve become engrained in the community, we love the community. We think we do a lot of good things for the community and in turn, the community has been great to us.”

Glynn added that they developed the Lift Bridge brand – for example, the feel of the taproom, and imagery on the labels – to match the area’s character and history, citing Stillwater’s significance as one of Minnesota’s oldest cities and the natural beauty of its river valley location.

“We thought it would be difficult to start up in a different community where we may not have that same intense connection,” Glynn said.

Finding the right place in Stillwater wasn’t easy, though. After searching some time to no avail, Lift Bridge’s real estate agent, Metro East Commercial Real Estate, called HealthPartners about property the medical company owned at the Southeast corner of Orleans St. W. and Washington Ave. The parcel wasn’t even for sale, but the gambit paid off – HealthPartners agreed to sell.

Stillwater Mayor Ted Kozlowski is apparently as excited about plan as Glynn is.

“Lift Bridge Brewing Company has been a tremendous addition to the City of Stillwater’s economy and tourism, and we are pleased with their decision to continue to be part of our community,” said Kozlowski in a statement. “With an iconic name symbolizing one of our city’s most historic landmarks, the brewery has established itself as a landmark in its own right that we are proud to call our own.”

Lift Bridge’s new facility is slated to be between 30,000 and 35,000 square feet – about double their current building. Glynn said when they make the move, they won’t transfer much equipment – in favor of purchasing new tools – and once the new place is operational, they’ll likely look to sell or lease the old building in order to keep everything under one roof.

For that same reason, Glynn explained, any additional company expansion within the next 10 years will revolve around the new Stillwater site rather than looking to build more sites elsewhere.

That 10-year Stillwater-centric vision was part of the appeal of the HealthPartners land parcel, as its size came with potential to add on to the building – from warehouse space, to cold storage, packaging space, cellars and more.

Glynn said the company’s growth means they will no longer be able to sell growlers. However, Lift Bridge is working with others to change legislation on production parameters for growler sales, and Glynn said there won’t be any other legal considerations or designations affected by the expansion.

Regarding jobs, Glynn said they plan on hiring about seven more full-time staff – primarily in production and management roles – and 10 more part-time employees within the next two years, as well as more, later down the road.

Lift Bridge expects to close on the property sale in about 90 days, and Glynn said they’re looking to have designs completed by mid-July. Architecture firm Hammel, Green and Abrahamson will lead the project. Glynn said they’re hoping to break ground on the new site in August, in time for Lift Bridge’s 10-year anniversary celebrations.

“We’re really excited to be able to expand within Stillwater and the industrial area we’re at,” said Glynn. “I think in Stillwater, and really all of Minnesota, it’s going to be a very unique destination point for people.”