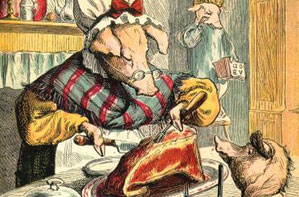 For years, Minnesota pigs have been eating restaurant, grocery store, and school food waste collected by Barthold Recycling, a network of pork producers based in St. Francis. Barthold cooks the waste according to animal health regulations before putting it out as feed.

Ramsey County has put several of its facilities on Barthold’s collection route in order to reduce solid-waste hauling costs, starting about two years ago with the Ramsey County Correctional Facility in Maplewood. (The county’s Zack Hansen notes that long ago, the prison operated as a working farm, where inmates’ food scraps were used to feed pigs that were used to feed inmates. So with the current recycling program, the facility has come nearly full circle.)

In April, the Landmark Center in downtown St. Paul, which is owned by the county, started recycling food from all the catered events held there. More spinach puffs for the hogs! And Amy Mino, who heads Minnesota Landmarks, the nonprofit that operates the center, says caterers like the recycling program, which could mean that more Twin Cities event facilities will sign on.