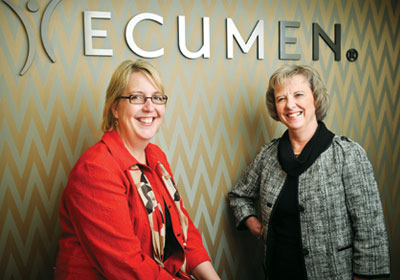 Learning to Get Things Done

The case for mentors in leadership development.
By Jack Gordon
May 11, 2012

Shortly after enrolling in the MBA program at Bethel University in St. Paul, every student is paired with a mentor, usually a retired executive or a career-development specialist. Each pair will meet up to six times before the student graduates.

What are the mentors for, exactly? What do they bring to the table that can’t be gotten from other educational strategies? Talk about mentoring relationships can get a little gooey, but Duncan McCampbell, Bethel’s MBA program director, offers an unsentimental answer.

The mentors are there “because we’re trying to graduate promotable people,” he says.

“When we went out and asked Twin Cities executives what they wanted in an MBA graduate, they told us they wanted people who could get things done,” McCampbell says. “They said, in effect, ‘Don’t send us more smart people; we have plenty of those. Send us people who know how to get things done in a large, complex, fast-moving organization.’”

That requires know-how that doesn’t come from advanced finance courses, McCampbell continues: “It’s about having organizational-navigation capability. There are lots of people who’ve had business training but still don’t understand how an organization makes decisions, how it picks winners and losers, how it really functions.”

A lot of those rules are unwritten, but a person has to understand them in order to move up in a corporate hierarchy and get things done on a wider scale. A mentor can play several roles, but McCampbell says that a primary one is to instill that ability to navigate.

“A mentor isn’t there to make you a better marketer or a better finance guy. We have courses for that,” he says. “The mentor’s job is to help you succeed in your organization and in your life.”

It would be too simplistic to say that this boils down to teaching corporate politics, though that is part of what “navigation” means. Kim Vappie is CEO of Menttium, a Minneapolis consulting firm that designs and helps manage formal mentoring programs, both within client companies and among different companies. “Cross-company” mentoring works, she says, because while organizations “tend to think they’re unique,” the fact is that experienced leaders from one company generally have seen many of the common issues that arise in another.

“The same kinds of things come up in every organization, and you have to figure out how to navigate them,” Vappie says. “How do I manage my manager? What do I do if my manager is a roadblock? How do I gain resources or funds to do what I think is important? How do I gain influence over a decision that impacts me? How do I pinpoint the motivations of different players?”

Formal mentoring programs, in which pairs are assigned by an organization, come in many shapes and sizes—including arrangements that don’t involve pairs at all because a single mentor is given not one but several mentees. Regardless of their format, however, most formal programs are designed for people who have been recently promoted or are being groomed for promotion.

Golden Valley–based food giant General Mills has a number of formal mentoring programs in place. Many are for people transitioning to a higher level of management. The reason, says Chief Learning Officer Kevin Wilde, is because a mentor can make a person a better boss, and “we believe in having great bosses.”

In some business units, for instance, an experienced manager is automatically assigned as a mentor to every first-time manager promoted from the ranks to a supervisory position. “Our leadership institute can give you all the training in the world, but there is nothing like a positive role model to guide you,” Wilde says.

Another program may kick in when a female or minority person at the director level is ready to take the next step up, to vice president. In an arrangement called executive co-mentoring, one of the top 25 executives in the company is assigned to the director for 18 months as a mentor. Both parties have specific learning goals—hence, “co-mentoring.”

As contributors to leadership development, mentors have two basic virtues, Wilde says. First, a mentor can “accelerate growth.” If a person needs to grow into a new leadership role, “learning from someone who has been down the path accelerates it.”

Second, by planting mentoring relationships throughout the company, General Mills promotes collaboration across organizational boundaries. People in different business units know, trust, and have access to one another. “Down the road, our executives are better at getting things done with other divisions because the relationships are there,” Wilde says. “[For instance,] consumer insights can move more easily from one division to another.”

Who Do You Know?

The connections built between senior leaders and people in the field have been a “priceless side effect” of a mentoring program at Shoreview-based nonprofit Ecumen, says the company’s vice president of human resources Robin Dunbar. Ecumen provides housing and services to elderly people.

The three-year old mentoring initiative runs as part of a leadership-development program for about 25 employees each year who have the potential to step into higher-level roles in the organization. Volunteer mentors from the senior management ranks each are assigned four or five participants as mentees. They serve as guides, role models, and navigational experts.

The priceless side effect comes in because Ecumen’s 4,000 employees are spread among more than 70 senior housing facilities in Minnesota and surrounding states, from independent-living communities to nursing centers. “There are not a lot of opportunities for people to connect with each other,” Dunbar says. Thanks to the mentoring program, Ecumen now has a number of lower-level leaders who don’t hesitate to ask direct questions or to speak the truth to someone in senior management. “If we’re doing something new and they have concerns, they feel comfortable to call someone high up in the organization,” she says.

The simple possibility of expanding one’s professional network, whether upward in one’s own company or into other organizations, is a commonly cited benefit of having a mentor. In the second year of a two-year MBA program at the University of St. Thomas’s Opus College of Business in Minneapolis, students are offered a volunteer mentor, usually drawn from the alumni ranks, matched to the type of career or organization that interests them.

“Often a mentor will introduce the mentee to a couple of people in [the mentor’s] network, who can offer different perspectives,” says LaBarre Spence, a career specialist at the college. Those people can become valuable contacts.

In one case, a mentor went so far as to take a St. Thomas MBA candidate to a professional social event to demonstrate networking skills, Spence says: “How do you introduce yourself to people? What do you ask? What do you say?”

Not every successful executive is well suited to be a mentor. The role requires genuine commitment to helping another person succeed, as well as some teaching and listening skills. Sources also agree that a mentor in the same company should be outside the mentee’s chain of command—not a boss, and not a sponsor who is in a position to influence a hiring or promotional decision.

Assuming a pool of qualified and willing mentors exists, the best way to pair particular mentors with the right mentees is to start with the mentee’s needs and objectives. “The secret sauce for a successful match is to let the mentee’s goals determine who the mentor should be,” says M’Lynn Hoefer, founder of St. Paul consulting firm Tapaidra, which helps companies establish and run mentoring programs.

What is the mentee trying to learn or accomplish? Whether the goals are tactical and related to a specific job or more “career-strategic,” Hoefer says, “the mentor should be an expert in areas that pertain to those goals.”

Sometimes it is obvious that the mentor must be someone in a particular type of role, as when General Mills looks for a senior division president to serve as mentor to a new division president. The same thing applies to one of Hoefer’s clients, a research company that wants every new sales manager to have an experienced, successful sales manager as a mentor.

Often, however, there is more cross-pollination involved. For some global clients, Hoefer has arranged pairings in which the mentor and mentee are in different functions and on different continents.

When choosing mentors for their MBA students, both Bethel and St. Thomas look for executives with experience in particular industries or even particular companies—Target or 3M, say—for students who are sure they want to work for those companies. But often the students’ career goals are less tightly focused. Personality tests and assessments of the students’ strengths, weaknesses, and life goals also factor into the choice of their mentors.

Even in mentoring programs intended for women or minorities, gender and race are not necessarily important matching characteristics. Menttium specializes in such programs, but “we don’t recommend necessarily matching mentors to demographic traits,” says Vappie. “One thing that makes for a rich partnership is points of difference . . . . If you ask a woman or a person of color what they want in a mentor, they’ll say, ‘Someone to help me with my goals.’”

The success of a mentoring program, or of a particular pairing, can be measured in a number of ways. If mentees are required at the outset to identify specific, measurable goals, Vappie says, then it is easy to tell whether the goals were met.

Most often, though, the success of mentor/mentee pairings is evaluated simply by debriefing both parties during and after the formal mentoring period. In other words, Dunbar says, “You ask them how it went.”

Hoefer says she could point to a lot of people who credit mentors for enabling them to get at least one promotion. But the testimonial that she feels best sums up the value that a good mentor can provide came from a person who said, “Thanks to my mentor, I get an extra two hours of sleep every night.”

“So many people today are under so much stress and feeling that their lives are out of control,” Hoefer says. “If a mentor can make you feel more effective and better at what you’re doing, you will lose less sleep.”