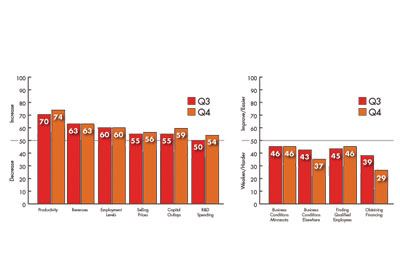 Of the 505 executives from throughout Minnesota responding to a survey conducted by Twin Cities Business in late September, 40 percent said that they expect their companies’ revenues will increase during the fourth quarter ending December 31. Only 15 percent anticipate revenue declines.

What’s more, half of all respondents anticipate increased employee productivity in the months ahead, versus 2 percent who see productivity slipping. And more businesses plan to hire additional employees (29 percent) than to decrease headcount (8 percent).

This sentiment is nearly identical to what leaders had forecast for the previous three months in Twin Cities Business’s first quarterly economic indicator survey. One difference is that only 8 percent of employers plan to cut headcount between October 1 and the end of the year; 11 percent planned to do so during July, August, and September.

Another somewhat upbeat change is that sentiment about overall business conditions in Minnesota is less pessimistic. More leaders believe the economy “will stay the same” in the months ahead (53 percent this quarter, compared with 43 percent in the third quarter’s outlook), and fewer leaders believe it will worsen (28 percent today, compared with 32 percent last quarter).

Bleak, however, is the assessment leaders have on business conditions nationally and internationally, with 43 percent now saying those conditions will worsen in the current quarter— up from 36 percent three months ago. Only 17 percent now say they believe the national/global economy will improve by December 31. This compares with 26 percent of respondents back in late June who believed such improvements would happen by now.

Twin Cities Business also asked what leaders’ biggest challenges are expected to be this quarter. The greatest percentage of common-theme answers (18 percent) related to finding new ways to grow revenues. Second highest touched on the difficulty in finding qualified employees (13 percent). The next three most commonly referred-to concerns revolved around maintaining revenues and profit margins (10 percent); government’s negative impact on business—from how Congress behaved with regards to the debt ceiling situation during the summer, to regulations and tax policy (8 percent); and overall economic uncertainty (5 percent).

While this was the third survey of its kind conducted by Twin Cities Business in the last six months, it was the first to find measurably significant negativity toward Congress and government in general. Minnesota industries where hiring is expected to be the most active during the fourth quarter include health care delivery and services (55 percent of leaders responding to the survey said they’re looking to hire); transportation (42 percent); wholesale trade (41 percent); biotech, med-tech, and pharmaceuticals (40 percent); and IT services, software, and telecom (39 percent). Industries most likely to do nothing on the hiring or firing front are entertainment/hospitality (91 percent of respondents said they’ll maintain employment levels), community/ nonprofits (86 percent); legal services (81 percent); real estate (77 percent); and construction (66 percent). Industries with the most responses from leaders planning to reduce headcount during the fourth quarter are utilities (29 percent say they’ll reduce headcount), banking and finance (19 percent), and architecture/engineering (15 percent).

In terms of capital outlays and infrastructure improvements, IT services, software, and telecom tops the list, with 52 percent of leaders from this industry group saying they’ll be increasing their investments in this area during the fourth quarter. Next highest are transportation (42 percent) and manufacturing (41 percent). Industries decreasing spending the most in this category are architecture/engineering, and insurance.

The biotech/med-tech/pharmaceuticals category will have the greatest increase in research and development spending this quarter, with 40 percent of leaders indicating they’ll spend more here. The next highest is the IT services, software, and telecom category, where 32 percent of leaders expect their companies to spend more on R&D. Industries cutting R&D, from deepest cuts first, are insurance, architecture/ engineering, and construction.

An email with a link to an online survey was sent to 14,473 representatives of Minnesota businesses in late September. The Minnesota Chamber of Commerce provided some of the e-mail addresses used in this outreach. Of the 505 leaders who responded by October 4, 90.6 percent represented privately held businesses.