Covid-19 prodded the founders of skyway lunch counter Allie’s Deli to reassess everything about their business.
By Adam Platt
October 25, 2020

At 12:30 p.m. on March 27, I wandered down a nearly deserted skyway near my office in downtown Minneapolis in search of lunch. Very little was open, save for Allie’s Deli in the Rand Tower. Prior to Covid-19, Allie’s served 1,000 customers on an average day, from breakfast until midafternoon.

Allie’s was a “deli” in the Minnesota sense, meaning a counter operation with a large sandwich selection; its menu grew like kudzu over its 15-year life to include breakfast and definitively nondeli items like salads and wraps. It was an endlessly accommodating place that would sell you half a sandwich, and there was never a charge for more ranch or an extra pickle slice. Allie’s prices were insanely low. Lunch for under $10 with beverage was never a problem, and many of my colleagues were on a first-name basis with the counter staff and the army of sandwich makers and prep cooks in earshot of the counter.

Co-owner Scott Robinson was always at the register (“We appreciate you” was his signature greeting), while his wife, Nicole Allie, the business namesake, filled customer orders.

On that day I was grateful Allie’s was operating; there was even a surprising line of construction workers waiting for their food.

I bought half a chicken-salad sandwich, which was a more than sufficient lunch, and spent less than $5. I knew I would be downtown infrequently in the coming months, but made a mental note to support Allie’s commitment as often as possible. Gov. Tim Walz’s emergency orders had been issued, and few understood the trajectory or durability of the pandemic, though its effect on skyway businesses was obvious.

“We lost money every day” after the pandemic began, Allie says, so “to keep people working.” Revenues were roughly 10 percent of normal after Walz closed sit-down restaurants and asked people to work from home. As a takeout business, Allie’s could have remained open, but “we kept going downtown and no one was there,” she says.

I next saw the couple on a riverside diner patio in Marine on St. Croix on an August weekday. “We thought we were going home for two weeks,” says Robinson, with a note of bemusement.

From stellar growth to getting by

Allie’s got its start in 2005 when Nicole Allie was devoting many hours making bulk meals in a commercial kitchen for her extended family. A friend owned the then-Rand Deli and wanted to sell. Robinson was working at the Ford plant in St. Paul. They kicked the tires and purchased the business that October. Over the years, they grew sales by 500 percent.

Even though quick-serve skyway businesses usually attract transient employees, Allie’s was a family environment. “People stayed even though they could make more somewhere else,” Allie says. The tight footprint and tighter margins normally would have dictated a very limited menu, but the couple kept expanding it, adding items like pancakes and a Cuban sandwich as customers requested them.

“We had people who ate lunch here every day,” Robinson says. Rewarding that loyalty seemed like a no-brainer.

But as the years passed, exponential business growth became essential to prop up sinking margins. When Allie’s was born, it was basically a cash business. When it closed, almost every transaction was on a card. That meant thousands of dollars in processing fees each month. There was the mid-‘00s mandate for biodegradable packaging. Wages rose every year, even when prices didn’t, and rental rates downtown blew past $40 a square foot.

Price increases were hard to pass along to a customer base that wasn’t made of money. “You can’t get $7.50 for a bowl of soup,” Robinson says—though he probably needed to. “We’re simple people. We didn’t want to gouge people.”

And the stakes seemed ever higher. “It’s a scary business. Food is very risky,” Allie says. “It’s gotten very stressful. It became this machine. We haven’t had a vacation in 15 years.”

Nor was it any less of a high-wire act for their staff. “The restaurant business used to be high school kids,” Allie explains. “But now it’s heads of households,” as the number of good-paying jobs that don’t require fluent English or a college degree have dwindled.

And then came the pandemic. After the initial shutdown, Allie and Robinson assumed their customers would be back in a couple weeks. Now it looks like a couple years.

“People are returning to suburban offices three times as fast as [to] downtown,” says Doug Sams, owner of D. Brian’s Deli, not far from Allie’s in the One Financial Plaza skyway. In midsummer he speculated downtown was 4 to 5 percent occupied—roughly half to a third of official estimates.

When the persistence of the pandemic became clear, Allie’s had an ace in the hole—an expiring lease. The Rand Tower was converting to a hotel, Allie’s had lost a chunk of space as a staircase was moved. They tentatively decided to explore their options downtown.

There were many buildings eager to host the high-traffic eatery, but rents were pre-pandemic high. Negotiations with Gaviidae Common and U.S. Bank Plaza went nowhere. In midsummer, as downtown’s malaise deepened, Allie says leasing agents acted as if it were still business as usual.

Sources in downtown real estate say landlords are largely holding firm on rents, banking on the pandemic being a one-year blip, reluctant to lower baseline 10-year leases, which would cost them a decade of revenue in response to a single bad year because of the coronavirus.

Not everyone views it that optimistically. The pandemic may be over by next summer, but there is worry that the work-from-home trend may permanently change downtown economics. “Downtown doesn’t seem like a viable market for years,” Allie suggests.

Allie’s is obviously not the only skyway business struggling in the pandemic economy. D. Brian’s Deli did not have the good fortune of an expiring lease. Two of Doug Sams’ three downtown locations are shuttered, while one soldiers on at 10 percent, merely so he can retain key staff. (His one suburban location operates at a third of normal business.)

Sams is in negotiations with four different landlords. “[They] will decide the future of these skyway businesses,” he says. Many are content to defer rent, Sams explains, but want out-of-pocket costs (taxes, building security, cleaning, maintenance) reimbursed, which is still roughly a third of most rent obligations. That doesn’t work when your business is closed or operating at 10 percent.

Sams says there’s not a win-win solution for most skyway eateries and landlords. And “most small businesses won’t break even trying to get caught up on deferred rent” after the pandemic. Sams says blithe talk of businesses defaulting and walking away to rise again is fraught as well, since “most leases are personally guaranteed.”

But the short-term pain may bring a kind of equilibrium to the restaurant business. “Half of us will be gone,” Sams predicts. “Supply and demand had been out of whack before. The cost of doing business was out of control, and you can’t raise prices.” For example, he says D. Brian’s incurred $50,000 in added annual cost when it had to switch to compostable containers to conform with Minneapolis code.

The goal right now for skyway businesses is to live to fight another day. “We are trying to use our limited financial assets to get to July [2021],” Sams said in late August, “and for that we need our landlords’ help.”

Allie and Robinson have decided to make no commitments about reopening until the urban economic situation is clearer. “We were so all-in, there was no way to think about what was next,” she says. “Maybe we should get jobs with benefits and vacation.” It’s not clear that she’s kidding.

The couple could return to what they know best, but that won’t be easy. Downtown Minneapolis is off the table for the foreseeable future, and very few other locations attract the concentration of lunch-hour customers that their location used to. A different space might require different hours, a different kind of business, and more risk.

Allie and Robinson didn’t plan on their first vacation since 2005 lasting months. And they are lucky that all they had to write off was a couple months’ income.

What’s harder to get over is the absence of the people who make the risk of owning a business worthwhile. “The loss of customers and employees is the saddest thing,” Allie says.

And as we parted, the two asked about the welfare of one of my colleagues, whom they used to see five days a week for nearly a decade, but hadn’t since mid-March. They knew her order by heart. “Is she doin’ OK?” Robinson asked. “Tell her to give us a call, will ya?”

This story appears in the Oct./Nov. 2020 issue with the title “Last Orders.”

The ex-Allie’s space in the Rand Tower skyway this summer. Photos by Caitlin Abrams
See all stories by this author > 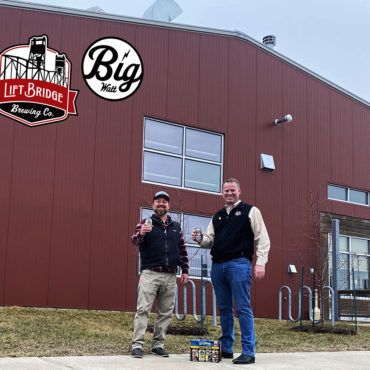