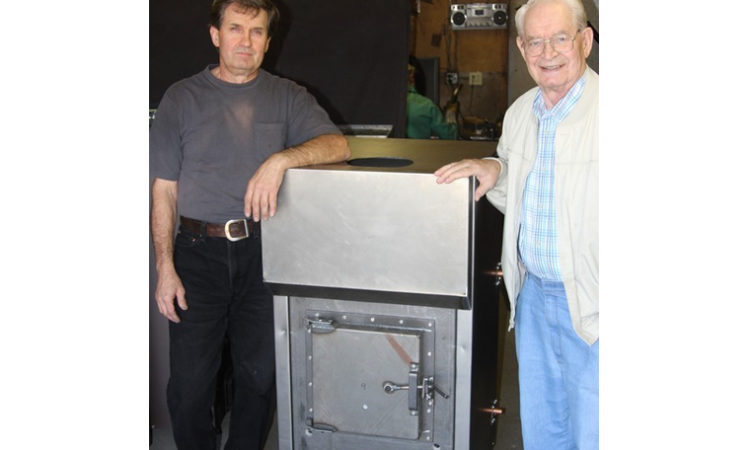 The family business specializing in wood-burning sauna stoves with the only EPA 2020-certified furnaces will lease half of a building owned and constructed by the City of Tower.
By Amanda Ostuni
September 11, 2018

Lamppa Manufacturing, a producer of wood burning sauna stoves and furnaces, is remaining in its long-held hometown of Tower but moving its operations into a bigger, newer building through a lease agreement with the city.

Lamppa is the only furnace maker in the nation to date to receive the “2020 mandate” certification from the Environmental Protection Agency, for meeting the new emission standards that will be implemented into federal law in 2020.

“We actually came in 40 percent cleaner than the new EPA standard,” beams Dale Horihan, Lamppa’s general manager. “We’re up against $50 million companies that haven’t even come close to hitting the standard.”

Horihan adds that with many furnace manufacturers going out of business in recent years—and others lagging far behind, technologically speaking—that there isn’t much direct competition out there. As a result, Horihan expects the demand for Lamppa’s products to grow.

With that optimistic outlook, the company will need to expand in order to ramp up production of its furnaces. As fate would have it, the company isn’t going far.

Lamppa has been based in Tower for 85 years, says Horihan, and has been located at its present building on 3rd Street since 1977.  That building has served them well, he says, but only has about 1,800 square feet of useable space which hasn’t been great for production.

Its new home will be 9,000 square feet, allowing for a 500 percent increase in production and the potential to triple or quadruple its staff over the next couple years. Lamppa currently employs eight full-time workers.

A $1.8 million building will be erected from scratch on a site the City of Tower has long owned that a decade ago was designated as an industrial park. Lamppa will lease out half of the building once construction is complete and will have first dibs on the second half for its own future expansion. The City of Tower, located about 50 miles northeast of Hibbing, will be able to lease the building for another use if Lamppa passes.

“We didn’t want to oversize,” says Horihan. “We have what we needed for now, but there’s potential for the business that it could blow out of the woods here.”

The project will be funded by a $1.85 million loan from the Iron Range Resources and Rehabilitation Board that was given to the Tower Economic Development Authority.

For the infrastructure and utilities of the building, the IRRRB awarded Tower a grant of up to $350,000, says Matt Sjoberg, IRRRB’s executive director of development.

“Lamppa is a long term manufacturer in our area, and the space they were in was really inhibiting their ability to grow,” says Sjoberg.

He says Lamppa approached them about helping the city finance a project that would help Lamppa grow while remaining in Tower. Horihan says Lamppa was eager to stay, as it’s a third-generation family business with plans for a fourth generation to take over.

“We’ve been in Tower forever, we started here, the second-generation owner was Mayor for 20 years, so we have strong ties with the City of Tower,” says Horihan. “We don’t plan to go anywhere now.”

The company is as tied to Tower as its furnaces are tied to Minnesota. Horihan notes every component of the computer-controlled furnaces, including the circuit boards and related electronics, are made in Minnesota.

Lamppa’s EPA 2020-certified furnaces are the result of a 40-year commitment to safety and environmental consideration. Horihan says current and third-generation owner Daryl Lamppa and his father, former owner Herbert Lamppa, knew the clean tech push would come eventually, and have been investing accordingly for decades, while other companies in the industry are just now figuring it out.

Horihan explains that the secret to Lamppa’s uniquely certified furnaces is the deployment of a production method, which other companies know about but haven’t been able to execute, involving gasifying the wood. This takes hydrocarbons already in the atmosphere, burns them, and puts the same amount of carbons back into the atmosphere, whereas, Horihan notes, burning natural gasses detrimentally releases carbon that had previously been contained, thus introducing more of a bad thing than there was before.

“This is not the wood-burning furnace your grandpa used,” says Horihan. “It’s better for the environment than natural gas.”

The bigger building will be able to churn out more furnaces and will soon include a furnace that caters specifically to the different living conditions in Canada and Alaska (which is currently undergoing EPA review).

Construction on the new Tower building is already underway, and Horihan says Lamppa expects to move in by the end of November. Horihan declined to disclose terms of the lease, but noted it’s a long-term agreement. He adds that Lamppa will sell their current building, which they own.