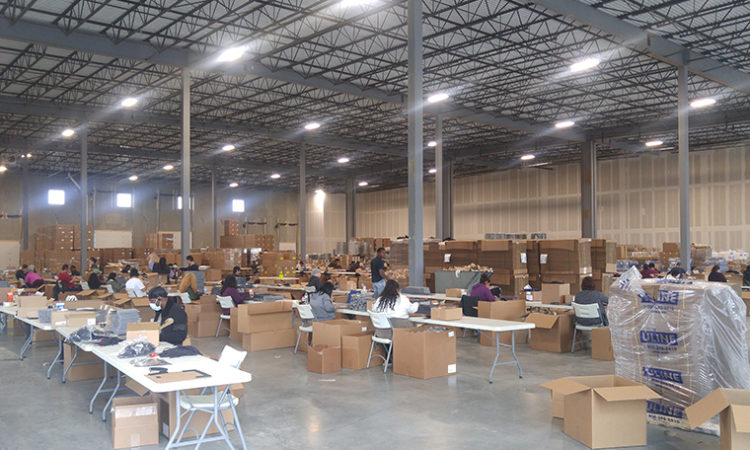 The Carver company has now sold six million shields, with another two million in inventory.
By Burl Gilyard
June 09, 2020

Carver-based Lakeview Industries works with manufacturers to produce a range of custom parts. But given the ups and downs of today’s manufacturing economy, its core business is down.

“A lot of our major clients were already sending us emails saying that they were going to furlough employees or they were shuttering their lines,” said John Schwanke, Lakeview’s president and co-owner, recalling the climate during the spring.

As the Covid-19 pandemic began to take hold Schwanke was watching the news in mid-March. Schwanke saw Gov. Tim Walz issuing a plea for personal protective equipment (PPE) amid a national shortage.

“That’s how it started. It was just watching the news and seeing that everyone on the front lines needed PPE,” said Schwanke.

Lakeview had no customers for those products, but Schwanke took the leap of faith: The demand was clearly there and he believed that Lakeview could make single-use face shields. Armed with a shield passed along from a friend who is a physician, Schwanke’s team got to work on a prototype. By late March, Lakeview was making the shields. Millions of shields, in fact.

“We’ve made about six million which is way more than we thought we would ever make. I had no idea what the demand was,” said Schwanke.

At one point, Lakeview had more than 120 temporary workers cranking out 300,000 face shields per day. Lakeview’s operations were running 24 hours a day and selling to customers in more than 20 states. Customers included distributors as well as some hospitals; Bloomington-based HealthPartners has been a customer.

Schwanke said that 3M, a Lakeview customer, circulated lists of PPE makers for products that the global firm did not make itself.

“We work a lot with 3M,” said Schwanke. “They actually helped us to find clients around the United States.”

Lakeview Industries was started in 1976 by Schwanke’s mother and stepfather. The company typically has 85 fulltime employees. Last year it built a new, 154,000-square-foot facility in Carver.

At this point, Schwanke has a large number of face shields that are assembled and ready to go if he can find buyers.

“I have almost 2 million in inventory,” said Schwanke. “Luckily, we have the space.”

Could face shields become a new permanent line of business for Lakeview?

“We’re entertaining that as option, we’re doing some market research,” said Schwanke, who added that most companies buying large quantities of shields are buying them again from China, which are much cheaper. “We’re looking at ways to automate our assembly…. We’re looking into is there any way possible for us to compete with that. Our team is working on that.”