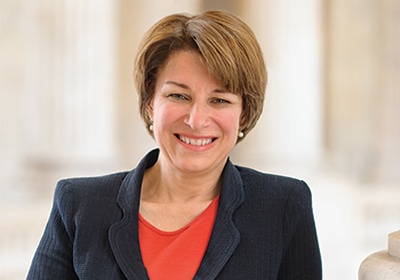 Here’s an unlikely scene for you. A crowd of about 50 people, mostly young, some tattooed, all earnest, at the Lagoon Cinema in Uptown, booing Senator Amy Klobuchar. That was the tableau during a recent showing of the documentary Fed Up, produced and narrated by Katie Couric, about obesity in America.

The film indicts the country’s privatized school-lunch program, where pizza has become the predominant meal. Schwan Food Co., which provides 70 percent of pizzas to schools, takes a hit for lobbying on behalf of nutrition standards that define tomato paste as a vegetable. As does Sen. Klobuchar, who wrote a 2011 letter to ag secretary Tom Vilsack defending the definition. She wrote that tomato paste contributes “dietary fiber, potassium—a nutrient of concern for children—as well as vitamins A and C.”

All true, but when those words were shown on screen, the crowd seemed eager to throw tomatoes. A spokesperson for Klobuchar says the office hasn’t heard much from constituents about the film, and her position remains the same.

“Senator Klobuchar sent the letter in 2011 because she doesn’t believe pizza should be banned from schools, and was concerned that it would impact jobs and dairy in our state,” says communications director Brigit Helgen, noting that the senator opposes new efforts in Congress to curtail school nutrition rules. (There is legislation in the U.S. House that would allow schools to seek a waiver from nutrition standards.)

Schwan, which reported more than $3 billion in revenue in 2013, took a defensive posture when approached by Couric. “We declined to participate in the film, as it was clear that its narrative had already been decided and that it would not accurately represent our food or strong commitment to schools,” says Mike Smith, senior director of PR.

David Jacobs, a professor in the School of Public Health at the University of Minnesota, splits the pie down the middle. “It’s true that a little bit of highly salted tomato paste on a piece of refined grain—forget about whether the cheese is good or bad—is not a good meal,” he says. But he suggests the best approach is still education. “The best thing would be for us is to train our children to eat a high plant-nutrient diet.”