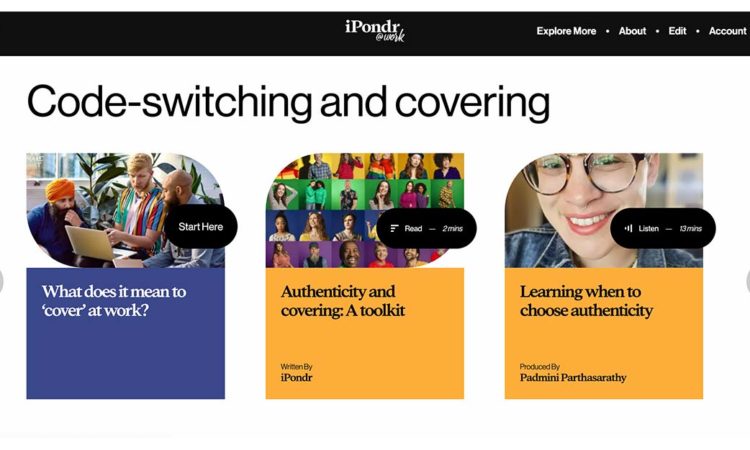 What started out as a news hub for diverse stories has transformed into a platform aimed at helping businesses build more diverse workplaces. iPondr.com

After leading the organizing efforts for the 2019 NCAA Men’s Final Four Basketball Tournament in Minneapolis, Kate Mortenson turned her attention to creating a media website.

Mortenson chose the name iPondr for the site and selected her media leadership team in 2020. “iPondr positions itself as an alternative to the clatter of personalities, pundits, and partisanship,” she said in a July 2020 news release. “Our unique presentation of immersive storytelling will underscore our shared humanity and enliven the idea that everybody has a role to play to make a better society.”

Mortenson earned an undergraduate degree in journalism from Boston University and worked for Hubbard Broadcasting early in her career, so the new website was a return to her journalistic roots. However, she wasn’t planning to cover breaking news and she wanted the site’s stories to expose people to diverse journalists and perspectives. She defined iPondr as an “empathy-focused multimedia company.”

Mortenson launched the website in early 2021 as a for-profit startup with a mission of public purpose journalism. Then she ran into the harsh realities that many legacy and new media organizations have faced. She needed to change her revenue model to ensure the business could survive.

During a recent interview with Twin Cities Business, CEO Mortenson talked about the evolution of iPondr from a media website to an education content company that focuses on workplace cultures.

Mortenson wanted to lead a media organization that was a force for good. The name iPondr reflected a desire to help people learn, or ponder, the experiences of people outside their media and life bubbles.

Under Minnesota law, she established iPondr as a public benefit corporation with the specific purpose of “fostering a more inter-connected world” and “developing cultural and global competence.”

In 2020, she hired key staff and they worked together to define their media niche and collaborate with an outside firm to design the website. Shona Koester, who has an extensive background in public radio, is iPondr’s president, and Cory Powell, who served in multiple leadership roles at the Star Tribune, is the chief experience officer.

After launching the website in January 2021, iPondr regularly posted new stories, or what Mortenson calls episodes, in three formats—written narrative, audio, and video. The editorial content primarily fell into seven overall coverage categories, which included “The Great Rural” and “Sports in Society” as well as content about identity, health, workplaces, trends, and points of view.

“We’re sharing stories of lived experience that are poorly reflected in national news, but are very societally relevant,” Mortenson said, noting that iPondr coverage included stories about the lives of immigrants, LGBTQ people, and Black male teachers. “We really wanted to reach across geographies, across race and ethnicity, and think about difference in a very inclusive way.”

To ensure that iPondr’s storytelling was diverse, Mortenson said a majority of her staff members are women and non-white. Those employees hired contractors to produce stories, and the freelancers from across the United State reflect diverse demographics.

“People who travel a lot have the benefit of all kinds of exposure to difference,” Mortenson said, but not everybody has that advantage. So she wanted to transport iPondr website users to various geographies and cultures to cultivate “a mindset of openness to difference, curiosity.”

Mortenson was pleased with the quality of the multimedia episodes being produced for the iPondr site. People from all 50 states had discovered the site, which offered free access. But iPondr was under the radar of many media website consumers. “We didn’t have enough money to really double down on those early results that we were seeing,” she said. So the iPondr team set aside the work needed to build the site’s audience, because it didn’t have the resources to fund the effort.

Four months after the iPondr site went live, Mortenson knew she would have to make a business model pivot. She had a light bulb moment when she was asking major Twin Cities companies to become financial sponsors for the website. While Mortenson and her colleagues were getting good feedback about the site, business executives said they would consider sponsorships after the website audience grew larger.

“Science and research tell you that when people are exposed to a lot of difference, their comfort with difference goes up, their curiosity is greater, their fear is less,” Mortenson said. So she and her team concluded that they could package their diverse editorial content for business executives, who want their workplace cultures to be “more innovative, authentic, mutually-supportive, inclusive, and high-performing,” Mortenson said.

Near the end of 2021, Mortenson started marketing iPondr@Work, which offers employers different services that include subscription learning and empathy workshops. In a promotional piece to prospective clients, the subscription learning solution was described as providing “ongoing micro-learning across societal topics” through the use of iPondr media content. Regularly offering new stories—on a single important topic—over several weeks is expected to increase “learner retention of DEI/equity concepts,” according to research cited by iPondr. Empathy workshops are centered on “shared learning experiences” designed to promote team cohesion.

“So the journalists’ storytelling has not changed,” she said. “It’s the vector for developing empathy skills and embedding diversity, equity, and inclusion (DEI) learning.”

In response to the racial reckoning and the Great Resignation affecting many American workplaces, Mortenson said there is demand for a “learning and development program to create the workplace culture that people want to be a part of.”

Since the early days of the iPondr website, its journalists have been producing editorial content in episodes, such as one addressing “code-switching and covering.” An episode could consist of a three-minute story read, a five-minute video, and seven minutes of audio content. Through collaboration with academics and workplace experts, Mortenson said her team discovered that “micro-learning” is a successful strategy to help people embrace DEI concepts and enhance their ability to be empathetic.

She added that iPondr content is regularly distributed to the employees of iPondr@Work customers. She used the topic of Asian-American hate as an example. Instead of requiring an employee to take part in a lengthy program, she said a lot of the iPondr offerings allow for self-paced learning and content may be offered in 10-minute increments weekly or every few weeks. “Small-bite media,” Mortenson said, “is a best practice for learning these equity concepts.”

Since iPondr@Work was introduced to the marketplace in late 2021, Mortenson has signed on 11 employer clients. Mazda, U.S. Bank, and 3M Co. are in the initial group of clients. Mortenson projects that iPondr’s revenue will be $1.7 million for 2022.

When Mortenson originally unveiled her plans for iPondr in 2020, she said she planned to raise $10 million in seed funding. She subsequently revised that goal downward to $7 million, and she’s secured $4.2 million.

“Raising is much harder than I realized it would be and it has grown my respect for women and BIPOC entrepreneurs,” Mortenson said, who receive a tiny fraction of all venture capital funds.

Of the $4.2 million raised, more than $1 million has come from Mortenson, who declined to be more precise on her portion of the funds.

“Our ambitions involve strategic capital investments and we hope our business thesis, traction, growing client base and revenue help to move those conversations along,” Mortenson said. “In pivoting to EdTech for Business, we’ve had to re-introduce ourselves and also grow our networks to new places.”

Since she started raising funds for iPondr, Mortenson said there are multiple people who “are all investors in the six figures up to $1.5 million.” Her first big investment came from Cargill heirs Betty MacMillan and the late Whitney MacMillan.

More recently, she has received large “equity investments” from Marcia Page, co-founder of Varde Partners, an investment firm based in Minneapolis. John Whaley, a retired partner with Norwest Equity Partners, and James Ganley, a managing principal with CarVal Investors, also have invested in iPondr.

“All revenues are coming from iPondr@Work programs and products and we are focused on business-to-business workplace e-learning for the near term,” Mortenson said.

She hopes that iPondr will benefit from the changes the pandemic has stirred in workplaces. In addition to flexible workplaces, many employees also are seeking employers who value differences in backgrounds and perspectives.

“If you don’t know where your culture is, it’s very hard to shape a better culture,” Mortenson said. So iPondr gathers employee engagement data and provides other insights to its business leader clients.

“Our path to being a viable business right now is the uptake of our business-to-business education content for cultural upskilling,” Mortenson said. “I know I’m using a lot of lingo.” In a nutshell, iPondr is trying to foster the growth of empathy in workplaces as well as embed DEI principles within company cultures so they are part of everyday life at work.

As Mortenson seeks more clients for iPondr@Work, a business overview document says that “empathy learning is the glue that makes DEI efforts stick.” It says the outcomes for those efforts are “greater innovation, higher earnings, talent attraction and retention, better customer service, and a more welcoming work environment.”

To help iPondr staff develop iPondr@Work, the organization is leveraging the expertise of a five-member advisory group. It includes Amelia Hardy, who is vice president of strategic community engagement and external partnerships at Best Buy. Another key member is Ravi Bapna, a University of Minnesota professor, who is academic director of the Carlson Analytics Lab and Analytics for Good Institute.

Mortenson has global ambitions for her nascent company. “This is our year to show that next step in development of a scalable, high potential business,” she said.