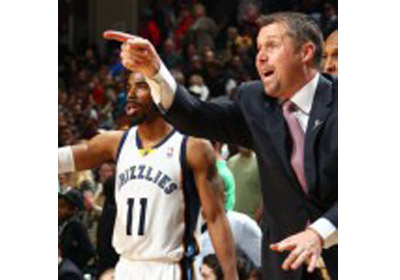 Joerger Spurns Wolves, Will Remain As Coach Of Grizzlies

Dave Joerger, the leading candidate to become the Minnesota Timberwolves’ next head coach, has decided to stay in his current job with the Memphis Grizzlies, according to several news reports. The Minnesota-born Joerger met Saturday evening with Timberwolves owner Glen Taylor about the coaching vacancy, and many expected that a deal was in the works to bring him to Minneapolis. Joerger returned to Memphis Saturday night and spoke several times with Grizzlies owner Robert Pera before deciding to remain with the Grizzlies, the Associated Press reports.

“Minnesota did everything right,” Joerger’s agent Warren LeGarie told the AP. Pera fired two top executives last week, which reportedly led Joerger to wonder about his standing there.  “He talked directly with the owner and gained a more healthy perspective about what Dave could and couldn’t do,” LeGarie said.

The Star Tribune spoke with Flip Saunders, the Wolves president of basketball operations, and he apparently was not surprised by Joerger’s decision.

“Dave was going through the interview process. We had good talks but it became very apparent to both parties that Dave was going to remain in Memphis,” Saunders said.

Joerger, 40, was 50-32 in his first season as head coach of the Grizzlies, and led the team to the first round of the playoffs. He has been with the team as an assistant for several years before that.