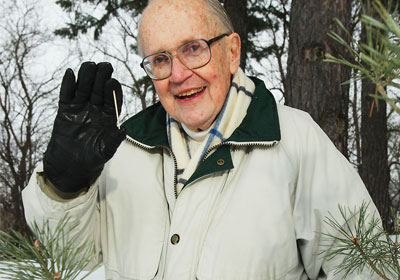 Joe Stark has skied, climbed, hiked, canoed, hunted, and fished his way through most of our nation’s great parks. Today, at 84, he’s working to ensure that his grandchildren can safely do the same.

Stark, a chemist and entrepreneur whose career (so far) has taken him to the Los Alamos National Laboratory, 3M, H. B. Fuller, his own Chippewa Lumber Industries in Wisconsin, and now his start-up, Apinee, Inc., in Minneapolis, says that most people don’t know it, but our national parks are slowly being poisoned. The villain: wood treated with chromated copper arsenate (CCA).

“The biggest user for the past 40 years was the national park system,” Stark says. Arsenic leaches out of the CCA-treated wood used for trails, stairs, railings, and roofs—and into the surrounding soil and groundwater. “You’ve heard about the fluorocarbons and how they’ve seeped into the groundwater? That’s peanuts compared to this,” he says.

Parks aren’t the only vulnerable sites. According to the U.S. Environmental Protection Agency, beginning in the 1970s most wood intended for outdoor residential use in the United States was CCA-treated. Today, CCA is mostly prohibited as a wood preservative, but according to Stark, the micronized copper that’s used in alternative treatments is also harmful to the environment.

Stark is applying nanotechnology to the problem. He hopes that Apinee’s flagship product, a water-based resin, can revolutionize the wood-preservation industry. The resin is chemically very similar to the lignin in the wood’s cells. “It looks like the maple syrup that you pour on your pancakes!” Stark says.

The treatment process is simple; Apinee’s NanoCore technology is not. Wood is soaked in a bath of resin and water at ambient temperature and ambient or slightly elevated pressure. The nontoxic resin penetrates to the core of the wood and chemically bonds with the cellulose and lignin in each cell, modifying the wood’s structure.

Stark says the result is wood that is dramatically stronger and more durable, and insect and fungi resistant. Nothing harmful leaches out. The wood can be safely incinerated or recycled later on. And because the treatment process doesn’t require the application of heat—and doesn’t require that the wood be dried beforehand—it consumes little energy.

NanoCore-treated wood “bulks up,” Stark adds, providing about 5 percent more surface area. The treatment has many possible applications and an important implication for forest management: It opens up new uses for fast-growing softwoods in products that would otherwise require the harvesting of stronger, slower-growing, more expensive hardwoods.

Stark, whose two-year-old company has 45 investors and three employees, has patents pending on Apinee’s resin. Meanwhile, he says, Finmac Lumber Limited in Winnipeg is set to be a distribution partner, and both Marvin Windows and Andersen Windows have expressed interest.

For now, he’s fulfilling a deal that he made with his father, an ardent out- doorsman: to spend half his life in chemistry (his chosen career), and half in the forest (his father’s wish). With Apinee, a name adapted from the Ojibwe word for “everlasting,” Stark is keeping his bargain—and then some.