A new study suggests that the federal government would recoup billions of dollars if more young people found work; it turns out, however, that Minnesota’s labor force is not to blame.
January 19, 2014 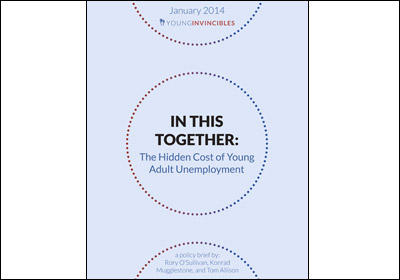 High unemployment among the nation’s young adults is costing the federal government an estimated $7.8 billion in taxes—and, in effect, it's raising Minnesotans’ federal tax bills.

And that’s despite the fact that Minnesota’s lower-than-average unemployment rate means the state’s labor force is responsible for only a small portion of the overall cost.

That’s one takeaway from a new study by Young Invincibles, a nonprofit that bills itself as a nonpartisan group that advocates for expanded health care, education, and economic opportunities for young adults.

The national study aims to calculate the tax revenue that is lost as a result of unemployment among Americans between the age of 18 and 34. (Or, conversely, the amount of extra money taxpayers are paying as a result.) To calculate the financial impact, it compared the levels of jobless young people today to 2007 unemployment rates.

Nationwide, if youth unemployment dipped back to pre-recession levels, the federal government would gain $7.8 billion in taxes, and state and local governments would net an additional $1.1 billion, the study found. In other words, high youth unemployment is costing the United States $9 billion in annual revenue. (A small portion of that revenue would come from recouping safety net benefits that are paid out, but the vast majority is in taxes.)

Another way to look at it: Unemployed youth are adding roughly $53 to each U.S. taxpayer’s federal tax bill, the report states.


How Minnesota Stacks Up

It turns out, however, that Minnesota’s labor force is responsible for only a tiny sliver of that cost.

The study found that unemployed young people in Minnesota cost the federal government only $309,000. By contrast, $76.9 million is incurred by jobless young people in neighboring Wisconsin, according to the report.

Minnesota's unemployment rate remains well below the national average. In fact, because Minnesotan youth are employed at a higher rate than prior to the recession, the state is collecting about $676,000 more than it would if young adult employment returned to 2007 levels, Tom Allison, one of the report’s authors, told Twin Cities Business.

That means that Minnesota is performing better than other states, but Minnesotans could theoretically see lower federal taxes if the rest of the nation’s unemployed young people went to work. And, of course, if Minnesota reduced its unemployment rate even further, the treasury would collect additional revenue.

The study suggests that the recent economic recovery has essentially left America’s youth workers in the dust. “In prior downturns, the employment rate for young adults nearly reached pre-recession levels within 5 years,” the study states. “In the Great Recession, young adult employment had not even recovered halfway by the same point.”

And the ripple effect expands beyond short-term losses in tax revenue. A lack of work experience among today’s youth will likely result in “repressed wages, decreased employment, and reduced productivity” down the road, the study states. One estimate suggests Americans between the ages of 20 and 24 may collectively lose out on about $21.4 billion in earnings over the next decade, the study added.

In its report, Young Invincibles recommends focusing on two primary areas to help right the ship: reconnecting young people to the workforce and sharpening their skills across the board to avoid another future crisis. For example, the group favors expanding work-based learning experiences like internships and apprenticeships, while also increasing services such as AmeriCorps and reinstating the Youth Opportunity Grant program that Congress defunded in 2005. That program helped target high-poverty areas, Young Invincibles said.

View the full report, including a state-by-state breakdown of the impact of unemployed young people, here.

“When young adult unemployment rates are nearly twice the national average, there’s little doubt that it hurts individuals’ prospects,” Rory O’Sullivan, Young Invincibles’ policy and research director and one of the study’s authors, said in a statement. “Now we have the economic evidence showing that everyone suffers through reduced economic output and lower tax revenues. Federal and state governments must make education and training of our generation a priority, or everyone will continue to lose out.”