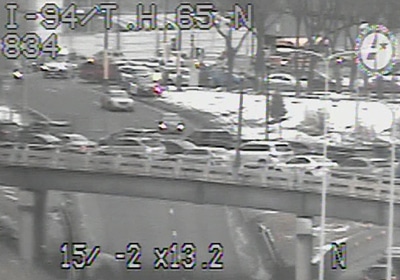 Both union and non-union janitors will continue plans to hold separate protests and walk-offs this week over ongoing issues regarding job rights and “wage theft.”
February 28, 2016

For a period of time, traffic was at a standstill and the State Patrol closed down exits to divert traffic elsewhere. Picketers ultimately moved back toward US Bank Plaza and the exits reopened.

Original story: On Tuesday, nonunion janitors who clean Macy’s and Herberger’s stores in Minnesota reached a $425,000 proposed settlement with a custodial services company alleged to have violated various payroll practices. Despite this, two organizations representing low-wage workers in Minnesota said the fight is far from over as both plan to hold multiple protests this week.

Approximately 300 to 600 janitors with Centro de Trabajadores Unidos en la Lucha (CTUL)—which translates to Center of Workers United in Struggle—will divide the settlement as back wages and damages. Judge Susan Nelson of the District of Minnesota, who also granted class-action status for the suit in November, will give final approval of the settlement at a future date.

According to the plaintiff’s allegations in the lawsuit, the issue of “wage theft” occurred in a variety of ways, including a lack of compensation for travel time between stores; not being reimbursed for cleaning supplies needed for the job; and being given “no choice but to be paid with debit cards,” resulting in ATM fees to access their wages.

In the court filings, Capital Building Services said it reached a settlement with CTUL’s lawyers after it “concluded that further litigation would be protracted and expensive and would divert management and employee time.” As a condition of the settlement, Capital Building Services would need to offer payment by check for its employees, along with the delivery of paystubs.

Jesus Sanchez, an employee of Capital Building Services and one of eight original plaintiffs, said in a statement that he and his co-workers “have won a big victory.”

“Wage theft is an all too common problem for retail janitors,” he added. “We don’t need a band-aid. We need a cure. And that cure is a voice on the job, union rights, and $15 an hour.”

Both nonunion and union janitors will hold separate protests this week to highlight ongoing issues occurring within the janitorial services industry at large. Janitors at the center of the class action suit will gather outside the Macy’s on Nicollet Mall starting at 6 a.m. on Thursday.

“Truly, the reason why a settlement doesn’t stop a strike is that this is the third major lawsuit of retail janitorial work in the Twin Cities in the last three years,” said CTUL spokesperson Merle Payne.

“The issue is that this is an industry rampant with wage theft and workers feel they shouldn’t have to go to court to get their paycheck,” Payne said. “For the workers in this class action, the end goal actually is to join the same union that represents these office-cleaning janitors.”

That union, SEIU Local 26, will be leading a number of picket lines during a 24-hour janitor strike starting Wednesday evening. Picket locations include:

The more than 4,000 unionized janitors on strike will be advocating for “fair wages (including a $15 floor for all workers), policies that address a growing workload crisis (many janitors clean the equivalent of over 20 homes per night), [and] benefits that allow for healthy families.” SEIU Local 26 members, janitors and their employers are scheduled to meet on February 22 to negotiate a new contract after their previous three-year contract expired at the end of 2015.