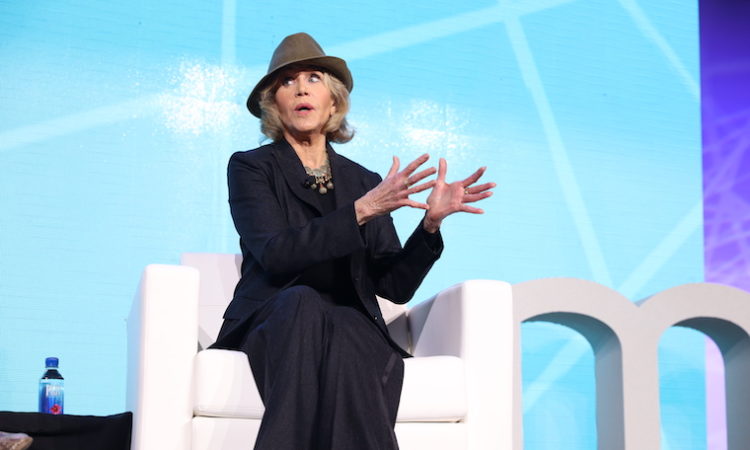 The 81-year-old actress explained what drives her to civil disobedience during an appearance at Manova Summit.
By Allison Kaplan
October 16, 2019

Fresh out of jail and fully planning to get arrested again this Friday, Jane Fonda took the stage in Minneapolis Wednesday to close out the Manova health summit. Her assigned topic was aging, health, and happiness, and she managed to tie that in to why she continues protesting at age 81.

“It influences how you live the last part of your life if you know you don’t want to leave with regrets,” Fonda said.

Climate and health, the actress and longtime activist said. “It’s going to change everything.”

Speaking on stage to CBS News correspondent Jamie Yuccas, Fonda said she drives an electric car and recycles, but didn’t feel like she was doing enough to stop climate change. “Collective crisis requires collective action.” She said she was motivated by teen climate activist Greta Thunberg to move to Washington D.C. and raise awareness for the issue through public protests, which she calls “fire drill Fridays.” “Greta said it’s like our house is on fire. I’m trying to make people feel a sense of urgency.”

Getting arrested at age 81 is no picnic, Fonda confessed to the crowd of health care executives, business leaders and policy makers at Manova, a conference that attracts an international crowd to discuss the future of health. “The handcuffs aren’t even metal—they use white plastic handcuffs and it hurts! Then you have to get up onto the paddy wagon—it took two people just to push me on.”

Fonda will turn 82 in December. “I’ll probably spend it in jail,” she said with a shrug.

Of course that fighting spirit is why Manova partner Kathy Tunheim said in her introduction that Fonda was first choice to close out a new track at Manova on aging. Fonda shared her secrets, both practical and philosophical.

“Stand up and own your space—posture can make you seem a lot younger,” she said, demonstrating on stage. “I’m not afraid of getting older. I’m not crazy about what gravity does, but I’m not afraid of dying. This cult of youth, fear of death—we need to get over it. We would be much happier.”

Fonda said she sleeps 8 to 9 hours a night, and when asked how she maintains her youthful appearance, she replied plainly: plastic surgery. “Good genes and a lot of money,” she deadpanned. “and attitude.”