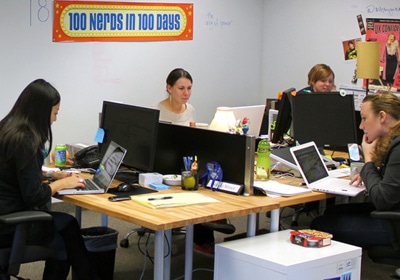 During its “Nerd Drive,” the company will award prizes to people who refer job candidates and help it reach a goal of hiring 100 new employees in as many days.
November 11, 2012

Since its 2003 inception, Bloomington-based IT firm The Nerdery has grown its revenue and employee base at break-neck speed—and it’s now enlisting help from the public as it aims to hire 100 new employees within 100 days.

The company refers to the effort as the “Nerd Drive.” Communications Manager Mark Malmberg told Twin Cities Business that The Nerdery is primarily looking to fill Web development positions in order to meet growing demand for the firm’s technology services.

“We’re essentially planning for 2013—ramping up now because there’s already a big need for what we do, and we anticipate it growing, and we’re trying to get out ahead,” he said.

The Nerdery currently employs about 395 in Bloomington, 35 in Chicago, and five in Kansas City. The company has consistently grown its headcount in recent years: It expanded its headquarters and hired 163 employees in 2011 (surpassing its goal of adding 100 that year). So far this year, the company has added 190 employees, CEO and co-founder Mike Derheim said in a statement.

About 25 percent of The Nerdery’s recent hires have come from staff referrals, but as the company continues to expand, it hopes the public can assist in locating qualified talent, according to Malmberg, who likens the Nerd Drive to PBS member drives.

During the drive, anyone who refers a candidate for a job at The Nerdery will be sent an “I Love Nerds” pocket protector; they’ll receive a commemorative mug if their referral applies for a job. If that individual lands an interview, the referrer will receive $100—and they’ll get $400 more if the referral is hired and works at the firm for a minimum of 90 days.

Schmidt acknowledged that the prospect of hiring 100 employees in as many days is “an audacious goal,” but if the company fails to reach it, “it won’t be for lack of trying, or real business need—but it may be because we’ve held firm to our own admittedly finicky hiring standards.”

Malmberg said that for its Nerd Drive, the company is not looking to hire a specific number of employees at individual offices; the applicants will influence where the growth occurs, and some new employees may work remotely, he said.

To refer a “nerd,” apply for a job, or simply monitor The Nerdery’s progress toward its ambitious hiring goal, click here.

The Nerdery, which in 2010 changed its name from Sierra Bravo Corporation, has appeared on Inc. magazine’s list of the nation’s 5,000 fastest-growing private companies five times, including this year. The Nerdery says that it has “roughly doubled its staff and revenue almost every year since its founding.” It was also recently named to the “Flyover 50” list, which is produced by Kansas venture-capital firm Five Elms Capital and recognizes the 50 fastest-growing companies based in the middle of the country.

The Nerdery’s revenue jumped 65 percent to $14.2 million in 2010 and then climbed 87 percent to $26.5 million in 2011. The firm’s projects have included websites for Target, General Mills, Norton Antivirus, EA Sports, and LexisNexis; the agencies it has worked with have included locals such as Zeus Jones and out-of-state firms like Leo Burnett, BBDO, and Heat. Some of the firm’s most recent work includes Facebook apps for Best Buy, an iPhone app for Hallmark Cards, and a new website for Purina One.

The company also runs The Nerdery Overnight Website Challenge, an event held several times a year and through which volunteer Web professionals have donated about $2.5 million in development services to 84 nonprofit organizations.

The October issue of Twin Cities Business included a profile of The Nerdery; to learn more about the firm and how it stayed strong following the tragic 2010 death of co-founder and President Luke Bucklin, click here.