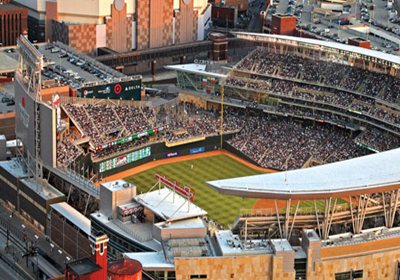 Is Target Field on Target?

Is the stadium generating positive returns on the public’s investment? Let’s check the scoreboard. Just don’t expect to see a final score.
October 11, 2010

The scene around Target Field on Twins home-game days this summer has been “crazy, in a good way,” says Hennepin County Commissioner Mike Opat. If you’ve found yourself in the Warehouse District’s now livelier businesses a couple of hours before game time, you know what he means.

From street level, at least, it looks like there’s a positive return on the money the public invested in Target Field. In 2006, the Minnesota Legislature approved a controversial measure that allowed Hennepin County to impose a 0.15 percent sales tax increase without voter approval—an increase that will provide $350 million over 30 years to cover the bulk of the stadium’s cost. The Twins contributed $195 million to cover debt servicing. The remainder of needed funding was infrastructure related and came from Target Corporation, the Minnesota Department of Transportation, and the Minnesota Ballpark Authority.

It’s too early to say whether ROI numbers from the stadium will bear out the street-level impression—no surprise there. What is surprising, however, given the pending debate over a new Vikings stadium, is that there aren’t more organizations or government entities trying to track Target Field’s payback.

The Minnesota Department of Employment and Economic Development and the Metropolitan Council both say that doing such an analysis would fall outside of their core work. The Minnesota Ballpark Authority says it’s not compiling data. Neither are the North Loop Neighborhood Association or the Warehouse District Business Association, which represent the stadium neighborhood. Sam Grabarski, CEO of the Minneapolis Downtown Council, says his organization is keeping tabs on some trends around the ballpark and might eventually have data to report.

Hennepin County is not tracking economic returns from the stadium. County Administrator Richard Johnson says he believes there’s no way to tell, at least for now, the degree to which economic activity can be attributed to Target Field.

For instance, both Johnson and Minneapolis Chief Financial Officer Patrick Born say that sales taxes assessed by county and city government could be a good measure from which to draw conclusions. But it’s impossible to know in detail the sources of that income. The Minnesota Department of Revenue collects the sales taxes levied by the two municipal governments, but it doesn’t break down the totals by geographic area or type of sale.