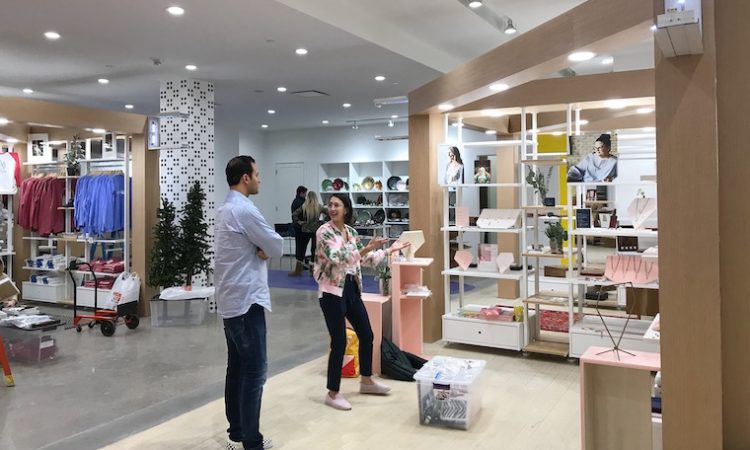 Is Fourpost the Department Store of the Future?

(In the photo above, Jordyn DiOrio of Mend jewelry previews her Fourpost studio shop at Mall of America for Fourpost founder and CEO Mark Ghermezian.)

Just when shoppers were coming around to that perplexing pop-up shop name, RAAS, which stands for Retail As A Service, Mark Ghermezian and his New York-based team changed it, along with the concept. Fourpost, which opens Friday in the former J.Crew store at Mall of America, is being billed as the brick-and-mortar answer to Etsy and Shopify: short-term, turn-key retail space designed to lower the barrier of entry for emerging brands. Fourpost is not a pop-up; it’s intended to serve as a stepping stone.

“We’re getting rid of the ‘why not’ of retail,” says Ghermezian, whose family owns the largest malls in North America: Mall of America, West Edmonton Mall in Canada and the soon-to-open American Dream in New Jersey. Despite launching Fourpost at MOA and West Edmonton, Ghermezian is quick to separate himself from the family business, called Triple Five Group. He’s building a new business community for the Warby Parker generation—a retail model that he says could work beyond malls (he's actively looking for additional locations). Still, Ghermezian does share his family’s belief that even in today’s marketplace, when it is relatively easy and cheap to build an online following, brands thrive in a physical home.

“You can’t be a nomad,” Ghermezian says.

That mindset appealed to Jordyn Diorio of Mend jewelry. “It’s almost like a science experiment. I have three months, during the busiest time of year, to test the storefront model. There is risk involved. I have done my homework and understand all costs required—staffing, rent, inventory—and I’ve mapped out scenarios to help define what would make this a success for Mend. Bottom line: I will be able to take away important data about my product and consumer in a cost effective, time-boxed manner. And I will also get closer to answering the question: should Mend open up its own store?”

Since MOA hosted its first Shop Local pop-up in 2015, makers who never thought they’d sell their artisan goods at a mall—let alone, the largest mall in America—have realized the potential of cashing in on seasonal shoppers. Each year since, MOA has improved its holiday pop-up, moving it to a more prominent location outside Nordstrom and adding new brands and interactive events, all curated by independent consultant Mich Berthiaume, who is now being courted by malls and commercial developers nationwide for her ability to make pop-up magic, bringing together a mix of sought-after brands and future stars. Like Spinning Wylde, a family operated gourmet cotton candy cart, which Berthiaume happened upon at a street fair in St. Paul. After a successful debut at Mall of America’s RAAS market last year, Spinning Wylde became the darling of the event circuit, even spinning its flavorful cotton candy at Walker Art Center’s Avant Garden gala. Spinning Wylde just opened a permanent space inside the new Keg and Case Market in St. Paul. So did Worker B, another company that participated in the first Shop Local and now has its own store at MOA as well.

After helping Fourpost secure many of its local vendors for this week’s opening, Berthiaume recently parted ways with Ghermezian to focus on North Local Market, the follow-up to last year’s Super Bowl pop-up at City Center in downtown Minneapolis, opening in mid-November. Berthiaume says many of the small brands she works with aren’t looking for anything beyond a holiday marketplace. They don’t have the staff, or the cash for rent, and some don’t have the interest in scaling up—especially during the post-holiday lull. Three dozen brands have signed on for North Local. They’ll pay $400 in rent plus 15 percent of sales.

Fourpost offers three, six and 12-month leases at around $3,200 per month. Ghermezian says that comes with a portfolio of tools designed to help tenants—or members, as he calls them—grow: retail merchandising guidance, staffing support, social media, analytics about traffic and sales, seminars on entrepreneurship and brand building.

Unlike MOA’s previous pop-up where the brands literally built their own mini-showrooms within a common space, Fourpost features uniform studio shops, so opening is as simple as placing goods on the shelves. The result is an experience that feels cohesive, polished, and elevated from the typical pop-up. The big question: is that what consumers want?

“It’s the new department store model,” Ghermezian says. “Each brand can make it their own.”

As Fourpost moves away from the pop-up concept, it is also moving away from the stipulation that all featured brands be local.  That’s been the draw to MOA’s holiday pop-up in the past—a homegrown maker experience in the middle of the mall.

Ghermezian’s proposition is “local flavor” with national and international brands mixed in. He believes shoppers just want to discover new products in a cool environment. While the majority of Fourpost vendors are Minnesota-based, including Still Kickin’ Julia Knight Collection, and Baubles and Bobbies, Fourpost is bringing in brands like Printworks, a Swedish gift and accessories collection that is making its U.S. debut. Polaroid is one of the latest—and largest— companies to sign on. For a legacy brand, the chance to associate with a forward-thinking retail enterprise and put its classic cameras in front of discriminating shoppers is understandably appealing. But what if the Polaroids of the world crowd in on the indie makers who give credence to Fourpost being something new and different?

“We won’t let it,” Ghermezian says. “We’ll always have local flavor. The local community is important to us. Our guests will always find their favorite local brands, but also discover new international brands, digitally native brands and in some cases, smaller or larger national brands.”

As they stocked their shelves in anticipation of Friday’s Fourpost opening, the locals sounded giddy about the opportunity.

“Fourpost gives us the opportunity to be alongside other like-minded people for an extended period of time,” says Nikki Hollerich, co-founder of Hagen and Oats, which makes custom wood decor . “We can make time to collaborate, bounce ideas of each other and most important, we have colleagues that know all about the roller coaster that is small business ownership.”

Hagen and Oats is one of several Fourpost brands that have participated in previous MOA pop-ups, just like Thumbs Cookies. “It’s appealing to be part of the next phase of the pop up,” says Thumbs president and CEO Robyn Frank. “This will definitely be an experiment to see if having more of a permanent/long term presence will pay off for us in terms of exposure and sales.”

Both signed on for just three months. Ghermezian is pushing for six and 12 month leases. He says he isn’t worried about attracting new tenants after the holidays and already has interest for spots starting in February. But there’s no question that the smaller brands, at least, are focused on the season at hand.

“For us, it was about being at Mall of America for the holidays. A presence at MOA is something that would normally be way out of our budget,” says Molly Mogren-Katt, co-founder of Namakan Fur, purveyor of winter accessories. “I hope retail concepts like Fourpost can make malls special again.”