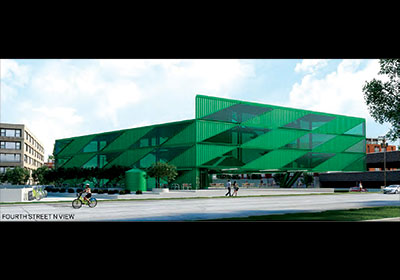 Is A Shipping-Container Building Coming To The North Loop?

Design junkies could barely contain their giddiness when plans were floated this past spring for an office building fashioned from shipping containers, slated for the hip, emerging North Loop in downtown Minneapolis. Documents submitted to the city last spring described the planned building’s shape as a “rhomboidal doughnut.”

The project is slated to be the home of the Akquracy marketing firm, currently based in the North Loop’s TractorWorks Building.

Shipping containers are “structurally stable. They’re a very inexpensive way to go,” says Tom Fisher, dean of the College of Design at the University of Minnesota. “Basically it’s a sustainability strategy. They’re a low-cost way of making functional space.” Nationally, Fisher notes, the containers—which are generally only 8 feet wide—have been more commonly used for single-family homes.

In late September, the Minneapolis City Planning Commission approved revised plans for the building, dubbed Steelcase. The latest version calls for a four-story, 23,000-square-foot structure with space for a cafÃ© on the ground level.

Akquracy founder Scott Petinga referred questions to his architect; partners with New York-based LOT-EK could not be reached for comment. Fisher says that LOT-EK is known for its shipping-container structures. Petinga’s Neat Pig Group paid $425,000 for the site at 525 Third St. N. in September 2012, according to property records.

“I’m excited about that project coming in,” says Fritz Kroll, a real estate agent with Edina Realty. Kroll, a resident of the area, is a North Loop Neighborhood Association board member. “It’s different, and I think that this neighborhood will embrace something that’s a little different.”

The project timeline is not clear. Petinga was previously approved in 2013 for a small, traditional office project called the Bickford on the same site, which was never built, but the North Loop makes sense as a landing pad for a design that pushes the envelope.

Fisher adds that the unusual building could be an asset in helping attract creative talent: “Doing cool stuff is important.”