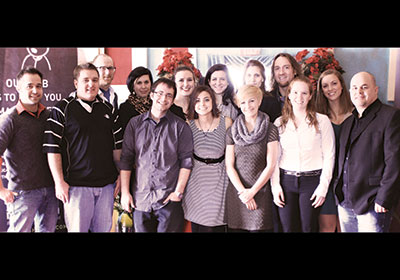 Darin Lynch drew a tighter focus and mission for his web development company after listening to a speech by author Simon Sinek.
July 01, 2014

[This is one of three Spotlight stories from the July 2014 issue, which focused on the theme of business owners' “Aha” moments. Also read the other stories about Bercom Inc. and Enlivenze.]

Back in 2004, Darin Lynch wanted to run his own web-development business, and had the confidence he could make it work. He had done well in technology stints at Second Swing Golf and Wilson’s Leather. He figured he could make his own shop work. So he rather brashly called it Irish Titan and started picking up work. That wasn’t the big aha moment for him, though. That wouldn’t come for another eight years.

From 2004 through 2011, the company grew, reaching revenue of $936,000—building out e-commerce platforms for clients like Ducks Unlimited and taking a percentage of the revenue raised—but Lynch felt like there was something missing—the Jerry Maguire thing; the mission thing. He figured out what his own mission was after hearing Simon Sinek, author of the best-seller Start With Why, speak in Minneapolis. Sinek’s concept of the “golden circle,” which places “why” in the middle, with the “how” outside that and “what” outside “how.” Lynch suddenly had his why. That was his aha moment.

“I didn’t have my road map defined at the time, but after listening to Sinek, I had it in five minutes,” the charismatic, shaggy-haired Lynch says. “I mean, obviously we already knew the what—what we did. And I had figured out the how, that we would form partnerships with clients. But now I had the why—that we would be about business first and online second. It all connected in that moment.”

Lynch’s sense was that many of his competitors in the web development space were focused on tools and platforms, and not investing deeply in the business matters of their clients. He wanted to do the opposite. He felt so strongly about this that he trademarked the phrase “Business First. Online Second.” It’s become a mantra for him and it’s turned out to be shrewd market positioning.

“I absolutely love Darin’s strategy and approach,” says Tom O’Neill, president of the Nerdery, which has 487 employees and does about $40 million in revenue. “There are too many web development companies out there selling small-business websites like they are advertisements in the Yellow Pages. Darin starts with the business objective and attacks the problem with the intention of providing return on investment. This approach will change the way small businesses look at the web.”

It’s already changed the way small business look at Irish Titan. Since that eureka moment, he’s had a lot of cool clients walk in the door, including Smitten Kitten, No Name Steaks, Spalon Montage. Fun work. And he’s staffed up to handle the new demands. Today Irish Titan employs 19 people and has $2.4 million in revenue. That Simon Sinek really knows his stuff.

What Lynch categorizes as a secondary aha moment of late is making smart hires to achieve scale. He’s worked hard for a decade to reach this moment, and it’s been difficult for him not to try to do everything. This is hard for any entrepreneur, but it’s been especially hard for Lynch, who has one of those 100-hour workweek motors.

“It’s true,” he acknowledges of his workaholic/hands-on tendencies, “and I’ve had a tricky time bringing on the right sales person. I’m like a lot of business owners; we all think we can sell better than anybody else. But I know I have a sales staff and a marketing team that works really well together . . . which has freed me up to run the company and be CEO,” he says.

Call them pivotal moments, transitional moments or just lucky moments. They’re as essential as the origination moment in creating and sustaining a business. The key is to recognize them as they come, and that’s a skill that Lynch, an ambitious fellow, possesses.

“I started out just wanting to be responsible for my own future,” he says. “But to get to this point where everything’s really in sync, that feels good.”